Exactly a week ago, AMD held a press event to unveil the Radeon RX 6700 XT, the newest and most affordable member of the Radeon RX 6000 series. That will be the case until the non-XT variant arrives, which AMD opted not to announce during the event. It's coming, though, and it appears ASUS is ready with at least two custom versions.
That's according to a new entry at the Eurasian Economic Commission website. In the past, there have been numerous leaks tied to the EEC website, as hardware makers register their upcoming products, including in some instances unannounced graphics cards. That is the case here—take a look... 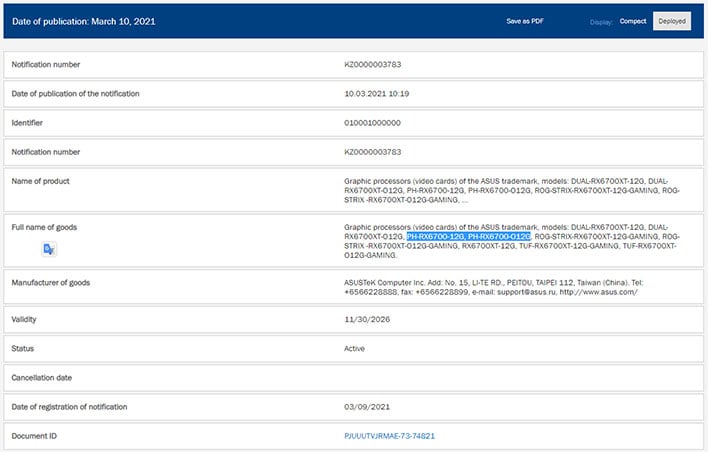 According to the list, ASUS has registered a pair of Radeon RX 6700 graphics cards, as part of its Phoenix series. One is a stock-clocked model (with whatever AMD's reference clocks end up being) and the other is a factory-overclocked SKU. And assuming the listing is accurate, it reveals the Radeon RX 6700 will debut with 12GB of GDDR6 memory.
It's expected the Radeon RX 6700 will feature a Navi 22 XL GPU underneath the hood. There has not been much in the way of leaked clocks, though if past rumors end up being right on the money, it will arrive with a 192-bit memory bus. So essentially the memory arrangement (amount, type, and bus width) will be the same as the Radeon RX 6700 XT.
As for the core count, here's what we're looking at so far...
When AMD launched the Radeon RX 6700 XT, it talked about it being the sweet spot for 1440p gaming, with the company claiming wins at max settings versus NVIDIA's GeForce RTX 3060 Ti. It's certainly interesting that the non-XT variant could possible debut with the same 12GB allotment. Fewer streaming processors means it will have the GeForce RTX 3060 (non-Ti) in its sights.
All of these details have yet to be officially confirmed, obviously, and the same goes for pricing. As a point of reference, the MSRP for the Radeon RX 6700 XT is $479.