Do you think maybe AMD's add-in board (AIB) partners are anxious to unveil custom cards based around the not-yet-announced Radeon RX 6600 XT with a Navi 23 GPU underneath the hood? At least one of them can barely contain their excitement. That would be PowerColor, which apparently is prepping at least three custom models.
You won't actually find any references to a Radeon RX 6600 XT on AMD's website, because officially, the card does not exist. Unofficially, however, we know it is coming. Reliable leaks and rumors say so, and none more trustworthy than PowerColor's own premature product listings—for a brief time, PowerColor's website referenced the Radeon RX 6600 series, and specifically mentioned the Radeon RX 6600 XT (there will also be a non-XT model).
Those listings have been taken offline, but you can still find them with a visit in the Wayback Machine (what happens on the web, stays on the web, folks). In addition, a retailer in New Zealand is now accepting pre-orders for three PowerColor Radeon RX 6600 XT cards: Fighter, Hellhound, and Red Devil. Have a look... 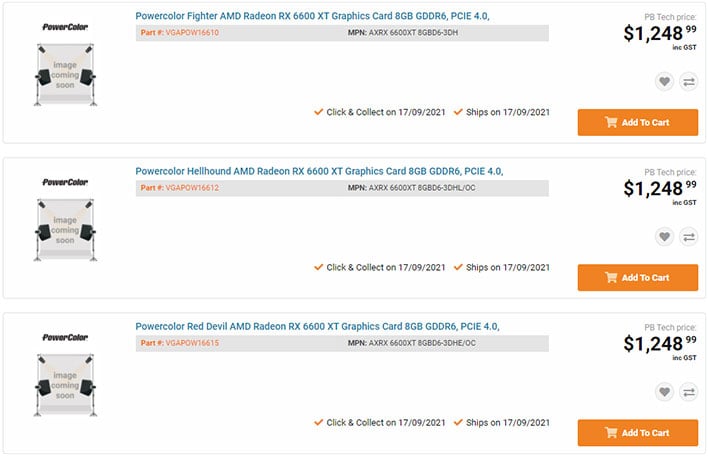 Unfortunately none of the retail listings outline much in the way of key specifications, like base and boost clocks, the number of streaming processors, and so forth. However, all three SKUs do confirm the Radeon RX 6600 XT will come with 8GB of GDDR6 memory.
Part numbers are as follows...
All three are listed at $1,248.99 in New Zealand currency, which works out to around $868 in US dollars. It is highly unlikely that all three cards will cost the same, and that these are placeholder prices, though it is curious that you can add them to your card and head to checkout (we did not register an account, so perhaps the orders stalls out before actually processing).
Either way, don't read too much into the listed price. GPU prices in New Zealand can be high to begin with, plus there is the lingering GPU shortage and the premiums PowerColor places on its elite models, like the Red Devil.
AMD will set the MSRP well south of what is shown, considering that the Radeon RX 6700 XT is supposed to cost $479. Rumor has it the Radeon RX 6600 XT will land at $399, but we'll have to wait and see. According to this particular retailer, the newest addition to the Radeon RX 6000 series will ship on September 17, 2021 (rumor has it AMD will launch the Radeon RX 6600 XT and 6600 in August).