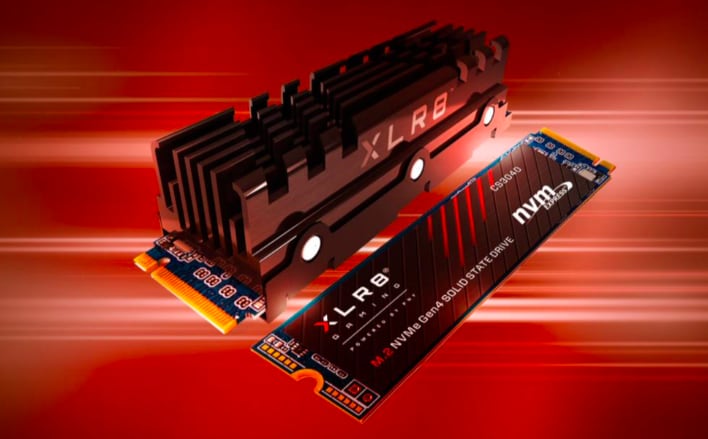 The market for PCIe 4.0 SSDs is expanding at a rapid pace, helped in part -- in the consumer market -- by the introduction of AMD's Zen 2/X570 platform in 2019. With the launch of Tiger Lake and the upcoming Zen 3 and Rocket Lake desktop processor platforms, PCIe 4.0 SSDs are going to filter further into the mainstream market.

One of the newest entries in the mainstream market is coming from PNY, and it's called the XLR8 CS3040. The XLR8 CS3040 offers a significant uplift in performance compared to the top PCIe 3.0 SSDs, delivering sequential read and write speeds of 5,600MB/sec and 4,300MB/sec respectively. This performance puts it in the company of the first-generation PCIe 4.0 SSDs that were released last year, but well behind that of second-generation PCIe 4.0 SSDs that are just now arriving with sequential reads in excess of 7,000MB/sec.

Although PNY hasn't provided us with pricing at this time (or which SSD controller it's using), we're hoping that this "mainstream" performance will mean more affordable prices for enthusiasts that don't need the absolute fastest PCIe 4.0 speeds for their gaming rigs. With that being said, PNY says that it will make the XLR8 CS3040 available in two versions. Standard models will come with an unadorned PCB, while high-performance SKUs will come equipped with an extruded aluminum heatsink with 8 fins to keep temperatures in check during sustained read/write operations.

PNY is offering the SSD in three capacities -- 500GB, 1TB, and 2TB -- and will back each with a 5-year limited warranty. According to the company, the XLR8 CS3040 family will begin shipping in mid-November, and will arrive on retail shelves in time for the Black Friday shopping rush later in the month.