Though cryptocurrency has drawn some ire worldwide, there is some serious market potential, and it would be foolish for tech companies to ignore potential financial gains. Take, for example, a cryptocurrency called Chia, which utilizes unused storage as part of a proof of space and time blockchain. The faster, the better, so SSDs were selling out incredibly quickly overseas. Now, it seems PNY is playing to the crowd and is launching a Chia-optimized SSD.

As mentioned, Chia is a proof of space and time cryptocurrency, which relies on unused storage on drives to be used for “plotting.” Plotting is a write-intensive process that records hashes which are then compared to a challenge broadcast by the blockchain. Therefore, as PNY explains, “a desirable SSD for plotting has high sustained write bandwidth and endurance (TBW, or terabytes written),” was previously only seen on enterprise-class SSDs. 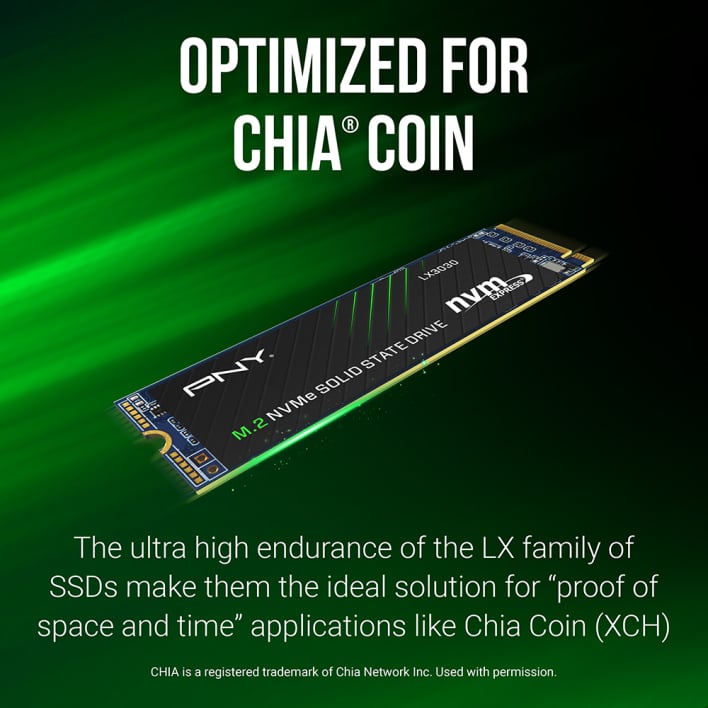 To cater to the Chia “farmers,” or traditionally named miners, the company is launching the LX3030 and LX2030, two M.2 NVMe SSDs featuring up to 54,000 terabytes written (TBW) and 10,000 TBW, respectively. To hit these high Plotting TBWs, “the LX series of PNY SSDs utilize an advanced AI Engine, LDPC and Flash I/F to improve NAND endurance, making them the best unit cost for plotting.”

Though these are quite high TBW numbers, it is interesting that this launch follows PNY significantly slashing its TBW numbers on other products. For example, in June, we noted that five SSD SKUs in the XLR8 CS3030 family had their TBW rate cut up to 80%. However, PNY claimed that this was due to the NAND shortage, but the timing is suspect.

Whether PNY intentionally fuddled some numbers on other products to make room for and launch this product, it should be good for Chia farmers, nonetheless. Hopefully, this will also help to keep the farmers away from regular consumer SSDs in the near future. Whatever the case, let us know what you think of companies catering to the miners in the comments below.