PlayStation 5 Restock Is Headed To Amazon, What You Need To Know

You would think that after nearly a year and a half on the market, finding a PlayStation 5 console in stock would be rather easy. And in normal times, it probably would be. The problem is, these times are anything but normal and all the newfangled hardware for gamers—PS5, Xbox Series X, PC graphics cards—remains elusive. That's where having a heads up on a restock event can help, like the one headed to Amazon.
That's the good news. If you've been trying to get your hands on a PS5 and keep coming up short, you'll have at least one more chance this month, and perhaps multiple shots. But what about the bad news? Well, there are some notable caveats. 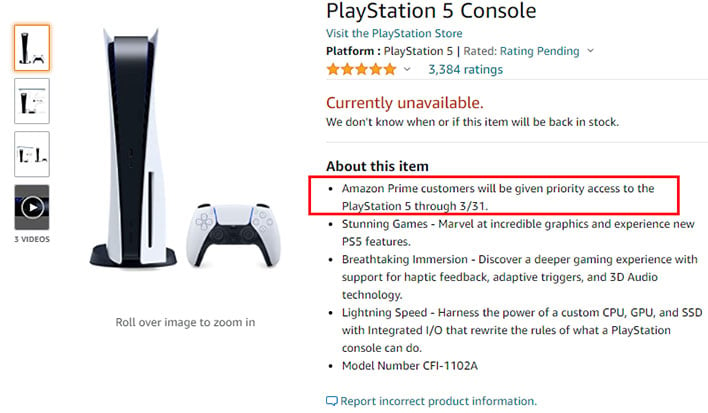 The first is that you'll need to be an Amazon Prime member to have any shot. Amazon's product listing for the PS5 notes that Prime customers will be given priority access. There's actually some decent value in the Prime membership program that extends beyond the free shipping perk, such as ad-free access to millions of songs and Amazon's streaming video service, discounted prescriptions, unlimited storage for full resolution photos, and more.
It's still an added cost, though, and if you're otherwise disinterested in a Prime membership, then it serves as another paywall just for a chance to buy a PS5. Which is another caveat—being a Prime member doesn't guarantee you'll be able to buy a PS5 during this month's restock(s), just that you'll have first dibs over non-members.

Lastly, Amazon has not said precisely when the PS5 will be up for grabs, just that Prime members will have priority access to the console through March 31. It could drop any time between now and the end of March. On the bright side, that also means there could be multiple restocks this month.
If you're new to Prime, you can sign up for a free 30-day trial (there's no indication that priority access will only be given to paid members). After that, it runs $14.99 per month or $139 for a full year. Students get a 50 percent discount and an extended six-month trial, and there's also a 50 percent discount available to anyone who qualifies for government assistance.