Most of us have been the victim of a random butt dial at some point in our lives. Some may have even received a text from dear ol' mom in response, asking if they we were OK, because our butt called her and all she could hear was muffled noises and faint voices. Now it seems owners of Google's Pixel 6 and 6 Pro can add phantom calls to their list of possible reasons why they might receive a text from a worried mom.

The Pixel 6 and 6 Pro launched late last month to mostly positive reviews. It is the first of Google's Pixel family to be powered by Google's own Tensor mobile chip, which was reportedly designed in cooperation with Samsung. The phones were also the first to launch with Android 12 already installed, and included new features like Magic Eraser that can currently only be found on Pixel 6 devices.

In a recent Reddit post, a Pixel 6 owner stated that their phone made a call to a friend in Europe, while the phone itself was face down on a table. They said the phone also phantom called another friend a few days earlier while reading a book, who they had never called before. It didn't take long before other Pixel 6 owners began chiming in with similar stories of their own. 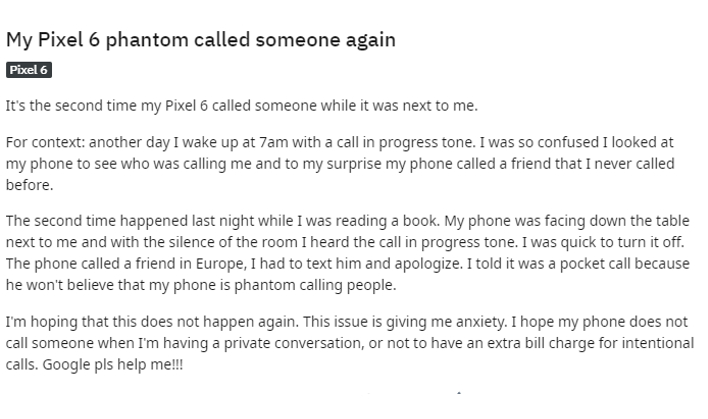 As more people began posting about their experiences with their phones making phantom calls, some began suggesting possible workarounds. One person posted that they had disabled the lock screen assistant function in the phone's settings and that had seemed to solve the issue. Another suggested turning off the "hotword assistant activation" feature so that Google Assistant would not be triggered by anyone saying, "Hey Google". This suggestion may not work in all cases, because some said their phones were making phantom calls while they were sleeping and no one was talking.

Owners of previous Pixel models may not be safe from phantom calls either. There are also posts on Reddit from people with Pixel 5 and 5a devices that have updated to Android 12 reporting the same issue. If that turns out to be the case, the issue is more than likely related to the Android 12 OS and not the hardware, and Google should be able to issue a software patch once it identifies the root cause.

Phantom calls are not the only problems Pixel 6 and 6 Pro owners have been reporting lately. Other issues owners have identified include the under-display fingerprint scanner being slow or rejecting a thumb scan, screen flickering, and some are saying the fingerprint icon disappears when the always-on display is active.  All of these seem to be software related though, so an Android OS update may resolve them all at some point.

If you are experiencing similar issues with your Pixel phone, Reddit is a good place to find others who may be sharing in your struggles (and often with a solution or temporary workaround). Let us know down in the comments of any issues you may have encountered with your new Pixel 6/6 Pro device.