By now, we think we have a pretty good idea of what the Google Pixel 6 and Pixel 6 Pro will look like at launch. Several rumors have coalesced around a unique design with a multi-colored back,
large camera bump, and premium materials.

Now, gadget leaker Jon Prosser alleges to have a bigger scoop on the specifications for the two smartphones. According to the report, the Pixel 6 will feature a 6.4-inch AMOLED display, with an 8MP selfie camera nestled within a hole-punch cutout. Out back, expect to see a 50MP wide-angle primary sensor and a 12MP ultra-wide sensor. In addition, Google is reportedly using its first custom SoC, condemned Whitechapel, for the smartphone paired with 8GB of RAM and either 128GB or 256GB of internal storage. Rounding things out will be a 4,614 mAh battery. 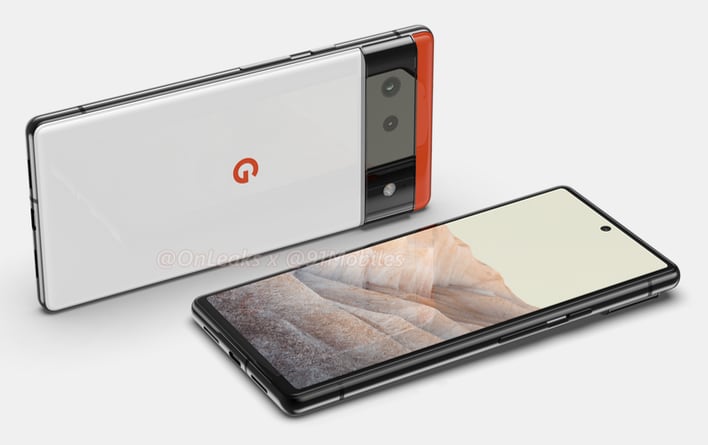 Turning our attention to the Pixel 6 Pro, its display will be bumped up to 6.71 inches in size, while it will adopt a triple-camera setup on the back (50MP wide, 48MP telephoto, 12MP ultra-wide) plus a 12MP selfie camera. In addition, the Whitechapel SoC will have 12GB of RAM and 128GB/256GB/512GB storage configurations. Finally, the battery will be slightly larger at an even 5,000 mAh.

Both smartphones will, of course, ship with Android 12, which is currently in the Developer Preview phase. However, according to Prosser, the big news is that Google will provide five years of Android software updates starting with the Pixel 6 and Pixel 6 Pro. This is a remarkable improvement from Google's current 3-year support window.

Earlier this year, Samsung announced that its Galaxy smartphones dating back to 2019 would receive four years of guaranteed Android security updates, which bested Google's policy. Given that Google is the brains behind the Android operating system, it was quite an interesting turn of events. However, if this 5-year update window is accurate, it would mean that Google is looking to adopt a more Apple-esque strategy for long-term [software] maintenance of its Pixel smartphones.