NVIDIA's recent high-end graphics cards from the GeForce RTX 3000 and 4000 series use a new 12 or 16-pin connector that is known as 12VHPWR. The implementation of the connector on the RTX 3000 cards was fine, but since the release of the GeForce RTX 4090, some users have been experiencing melting connectors and burned plugs. Initially it seemed like shoddy construction of the adapters was to blame, but power supply expert Jonnyguru has another idea: you're plugging it in wrong.


Jonnyguru, more properly known as Jon Gerow now that he's working for Corsair and not running his own site anymore, got into hot water in the early days of this controversy when he made some inaccurate remarks and got called out by Gamers Nexus for it. That was down to him not having had an adapter on hand—he blames NVIDIA—and it's all water under the bridge, now. Make no mistake: he definitely knows his stuff, and he's been exhaustively testing the connectors now that he's gotten ahold of some. 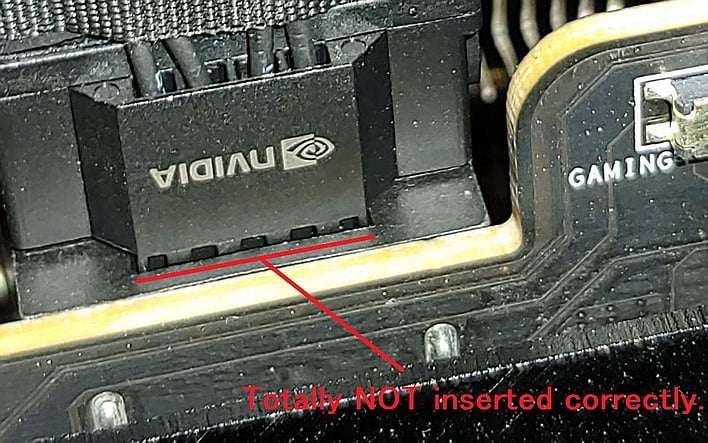 Through dedicated testing, he wasn't able to make one of the connectors fail at the solder joints the way Igor (of Igor's Lab) claimed was happening. Indeed, as he points out, none of the failures have been at that part of the adapter. All of the melting and burning is happening inside the connector installed into the graphics card.


Instead, Jon has another theory: you're not plugging it in far enough. See, PCI-SIG originally noted before these connectors were in the wild that these failures were possible if the contacts inside the plug didn't make a good enough connection. A poor connection will cause current to pass through a much smaller contact area, which in turn drastically increases the temperature of that specific spot. 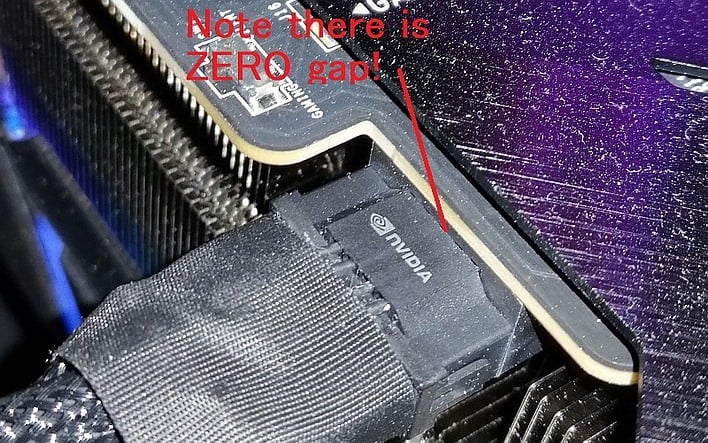 Jon provided these pictures (above and further above) to compare a connector that's been plugged in properly versus one that hasn't. The difference isn't obvious unless you're looking directly at it, and many users are likely building machines in relatively poor light or without a flashlight to let them look carefully at the mating of the 12HVPWR connector.


Whatever the real reason for these failures, it's enough of an issue that PCI-SIG is accepting Engineering Change Requests (ECR) for the connector until December 6th. It's not clear whether this will result in an actual modification to the plug, or what that modification might be, though. The ECR request notes that it is "to address a system-side shroud design" and that it is "unrelated to high-power connections."

For its part, NVIDIA has remained silent on this issue even though we're rapidly approaching one month since the GeForce RTX 4090 hit store shelves. From user reports, we know that the company has offered to replace the graphics cards of affected owners, although at least one owner declined the company's deal due to being offered a Founders' Edition card instead of his expensive ASUS ROG model.

With all of this said, it's important to keep this issue in context. Gathering all the reports we've seen, there have far less than even a hundred issues with burning 12VHPWR connectors. Unless it's happening at a high rate and simply not being reported—which seems unlikely to us—it's probably a fairly rare issue. For now, just make sure you ram that plug into the connector as far as it will go, and avoid bending the cables if you're using an adapter.