The European Southern Observatory (ESO) has shared new pictures of the Flame Nebula that gives the appearance of a wildfire in space. The images were captured using the SuperCam instrument at Atacama Pathfinder Experiment (APEX).

Capturing photographs in and of space has been on the minds of many as the James Webb Space Telescope (JWST) launched last month. NASA and its partners have been on the edge of its seat watching as the telescope fully deploys on its journey through space. The photos that JWST is expected to be able to capture will hopefully unlock and reveal secrets to the history of our universe. But until JWST is ready to begin sending photos back, we have been given the opportunity to gaze upon firey images of Orion's Flame Nebula.

Orion is one of the more popular regions in space when there is a new telescope to test out for astronomers. It is home to the giant molecular clouds nearest to the Sun, and is made up of enormous cosmic objects made up mainly of hydrogen, where new stars and planets form. Positioned somewhere between 1300 and 1600 light years away, these clouds present the most active stellar nursery in the Solar System's neighborhood. A resident of that neighborhood is the Flame Nebula, featured in the pictures just released by ESO. A cluster of young stars at its center that produce high-energy radiation and make the surrounding gases shine are what produces the fiery images. 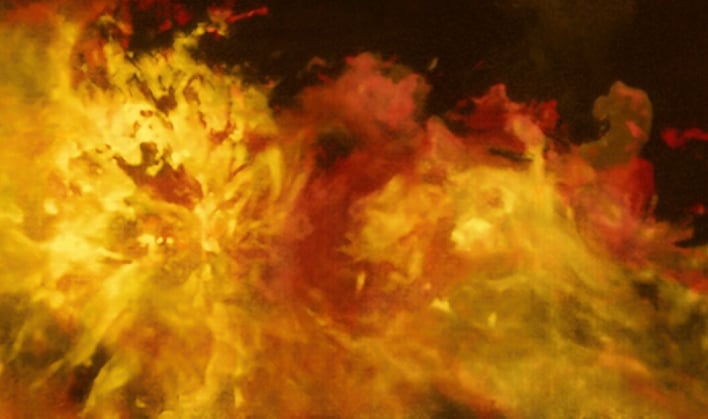 The images that were captured are actually the product taken by the then new SuperCam instrument at APEX by former ESO astronomer Thomas Stanke and his team. SuperCam is a 64-pixel 345GHz heterodyne array built by the University of Arizona and is located on the Chajnantor Plateau in Chile's Atacama Desert. The instrument is designed to study the molecular clouds found across our galaxy.

Stanke said about SuperCam, "As astronomers like to say, whenever there is a new telescope or instrument around, observe Orion: there will always be something new and interesting to discover!"

Observations were made by looking at the radio waves emitted by carbon monoxide (CO) in the Orion clouds. The study was conducted as part of the APEX Large CO Heterodyne Orion Legacy Survey (ALCOHOLS). Utilizing CO to probe wide areas of space is the primary goal of SuperCam. This permits astronomers to map large gas clouds that give birth to new stars. Even though the images convey an image of something that is on fire, these clouds are actually very cold. Temperatures are typically just a few tens of degrees above absolute zero.

Along with the Flame Nebula and its surroundings, the team was able to gaze upon a vast range of other breathtaking objects. One of those was the reflection nebulae Messier 78 and NGC 2071, which are clouds of interstellar gas and dust that are thought to reflect light of nearby stars. Stanke and his team were also excited to discover a new nebula, a small object, incredible in its nearly perfectly circular appearance, which they named the Cow Nebula.

Being this region of the sky is believed to hold many secrets, it has been observed many times in the past at different wavelengths. Each of these wavelengths has unveiled different and unique features of Orion's molecular clouds. Infrared waves pass through the thick clouds of interstellar dust and allow astronomers the ability to see stars and other objects which otherwise would remain concealed. An example is the infrared observations performed with ESO's Visible and Infrared Survey Telescope for Astronomy (VISTA) at the Paranal Observatory in Chile that makes up the serene background in the photos shared of the Flame Nebula and its surroundings.

The images shared by ESO provide even more reason to be excited about what JWST might reveal once it begins sending photos of the universe back to Earth. There is much left in the vast expanse of space to explore and that has yet to be uncovered due to the limitations of current instruments that are being used. We all await to hear what new untold stories the universe has to share with us and what mysteries might be solved.