Origin PC is now accepting orders for its new "Ludicrous PC," a modified Radio Flyer Tesla Model S toy car with high-end PC gaming hardware that sits literally underneath the hood. Specifically, an AMD Ryzen 9 3900X processor and GeForce RTX 2080 Ti take this thing from 0 to fun for those who can afford this kind of luxury.
The press release pegs the starting price at $13,370, an obvious play on 1337 ("leet"), though a visit to the semi-customizable product page comes up with a $13,432 sticker price. Either way, it's expensive. Some might even say it's a ludicrous amount to spend on a PC, though that's not where the name comes from—Model S vehicles have a pavement-slaying 'Ludicrous' mode that boosts the powertrain for added acceleration.

This project began as a custom build for Marques Brownlee, the popular YouTube personality who also goes by MKBHD. Somewhere along the line, Origin PC decided to open up orders to the public, for a limited time.

"True to its name, the Ludicrous PC is a special edition PC that combines a Radio Flyer Tesla Model S with a liquid-cooled high-performance Origin PC," said Kevin Wasielewski, Origin PC CEO and co-founder. "The Ludicrous PC is a true showcase build that the Origin PC team created which was inspired by MKBHD’s high-quality content and his high-performance Tesla. For a limited time, you can order your own on OriginPC.com for $13,370." 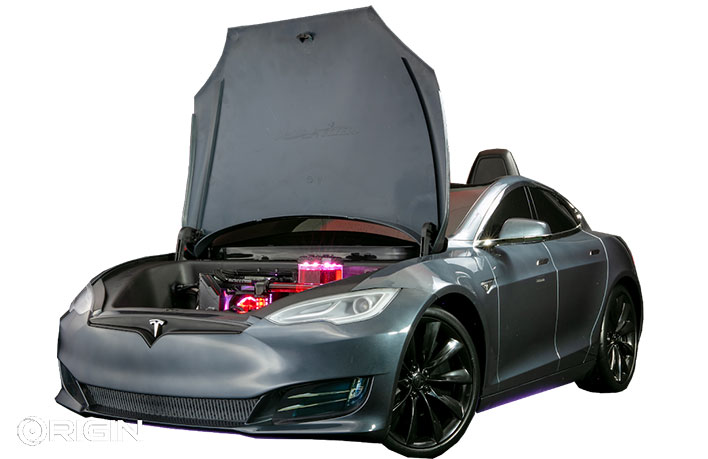 Here's a look at the hardware that comes standard... 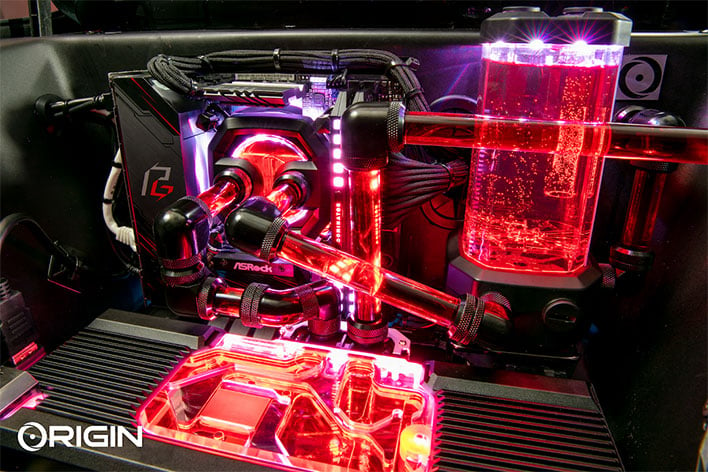 This thing is ready for the virtual race track. That is, when your kids aren't driving the PC around the driveway, because Origin PC was able to retain the full functionality of the toy car. Yes folks, it's drivable! Even without the PC crammed inside, it's actually a detailed and impressive kit with accurate button placements and a working horn. The toy car alone is worth $600.
Customization options are mostly limited to color selections—you can choose the color of the car and whether you want black or silver rims. You can also select the color of the coolant, and of course add on various accessories. The core hardware configuration is locked, though, so there's no chance of downgrading the CPU or GPU to save a few bucks. And if you're ordering this thing, be sure to expand the 'Free Origin PC Gear' section and select your shirt size. Or whatever size your kids wears, in case you feel like a PC-slash-toy car of this caliber is not enough to solidify yourself as coolest dad/mom on the block.
Origin PC has been flexing its muscles in the mod department. Earlier this year, it made available its Big O, a custom gaming PC infused with the buyer's choice of an Xbox One S All Digital Edition or PlayStation 4 Pro. Like the Ludicrous PC, the Big O started off as a one-off custom project before morphing into a customer option.
What will Origin PC think of next? We have no idea, but we're excited to see whatever it might be.