Advances in fast charging technologies mean we'll spend less time waiting for our smartphones and other electronics to recharge, but how fast are we talking about? Try just 15 minutes to bring a premium smartphone from nearly depleted (1 percent) to fully charged (100 percent), which is the promise of Oppo's 150W SuperVOOD flash charge technology.
This is one of two "breakthroughs in high-speed flash charging" unveiled at Mobile World Congress today. The other is 240W SuperVOOC for even faster charging times (more on that in a moment), though it's the 150W tech that will show up this year in mid-range and high-end smartphone models from both Oppo and OnePlus. 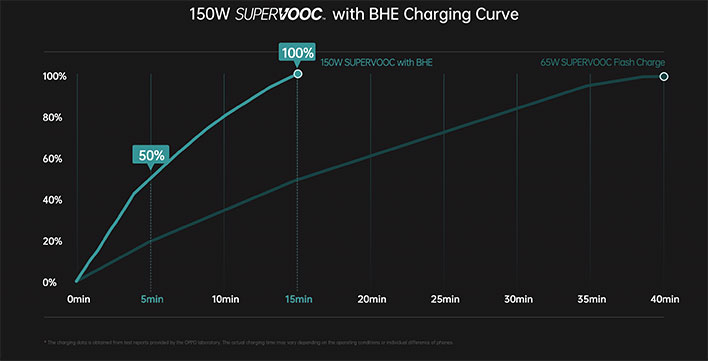 Oppo's 150W SuperVOOC tech uses direct charging technology with dual charge pumps to support up to 20V/7.5A charging. In doing so, the company claims a phone with a capacious 4,500 mAh battery can go from 1 percent to 50 percent only five minutes, just slightly longer than it takes me to brew a cup of coffee, and to 100 percent in only 15 minutes.
There's more to this technology than just speed. Oppo says this will also come with its self-developed Battery Health Engine (BHE) to effectively double the lifespan of batteries compared to conventional flash charging. This is accomplished through a combination of a battery health algorithm, self-healing technology in which the electrodes are someone continuously repaired during charge and recharge cycles, and a special battery management chip. 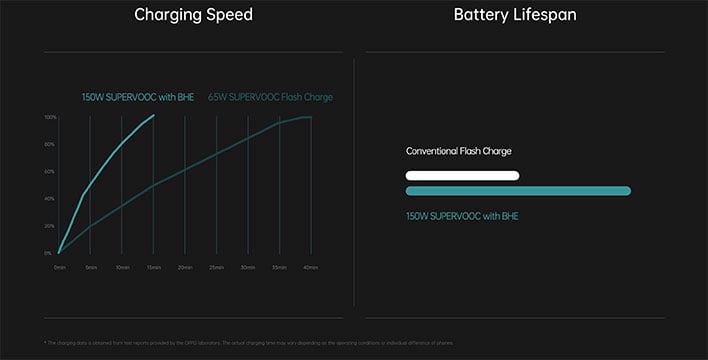 According to Oppo, this enables a battery to maintain 80 percent of its original capacity after up to 1,600 charge cycles, which is double the industry standard. So if the claims hold true, future phones from Oppo and OnePlus will offer much faster charging and longer battery lifespans.
"As charging science continues to develop at an ever-increasing pace, users’ expectations are responding accordingly. Since the launch of VOOC flash charge in 2014, Oppo has prioritized the overall charging experience while leading the development of flash charge technologies. We will continue to push the limits of high-power flash charge technologies, actively tackling emerging issues such as the deterioration of battery health, and providing users with safe, efficient, smart, and fast charging solutions that go beyond speed," said Jeff Zhang, chief charging technology scientist at Oppo.
Yes, Oppo employs a chief charging technology scientist, and Zhang's team isn't stopping at 150W. Oppo also unveiled a 240W SuperVOOC variant designed with 24V/10A technology on the Type-C interface. By way of three charging pumps, it's said this can take a 4,500 mAh battery from 1 percent to 100 percent in a mere nine minutes. 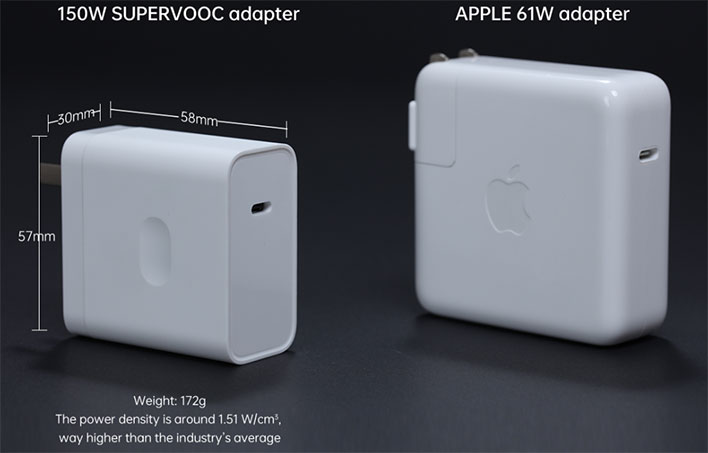 This is safe and seamless, Oppo says, though it doesn't sound as though its BHE technology is part of the protocol just yet. As for the 150W charging tech, accompanying power adapters will be around the same size as Oppo's 65W SuperVOOC adapter (and smaller than Apple's 61W adapter), measuring 57mm high by 60mm wide by 58mm long, and weighing 172 grams.
None of this tech arrived in time for the OnePlus Find X5 Pro, which sports an 80W SuperVOOC fast charging solution. But the 150W solution should manifest in shipping phones later this year.