At present, OnePlus is a company best known for its smartphones, and to a lesser extent, its wireless earbuds and smart televisions (in certain markets). However, a new trademark filing shows that OnePlus might be looking to expand into a segment that many Android makers have long abandoned: tablets.

This information comes to us from a listing with the European Union Intellectual Property Office (EUIPO). Not much can be gleaned from the listing other than the fact that the new device is called the OnePlus Pad. The name would lead us to believe that OnePlus wants to establish itself in the market that the Apple iPad dominates. There are other competitors in this segment, including Amazon with its FireOS-based Fire tablets. 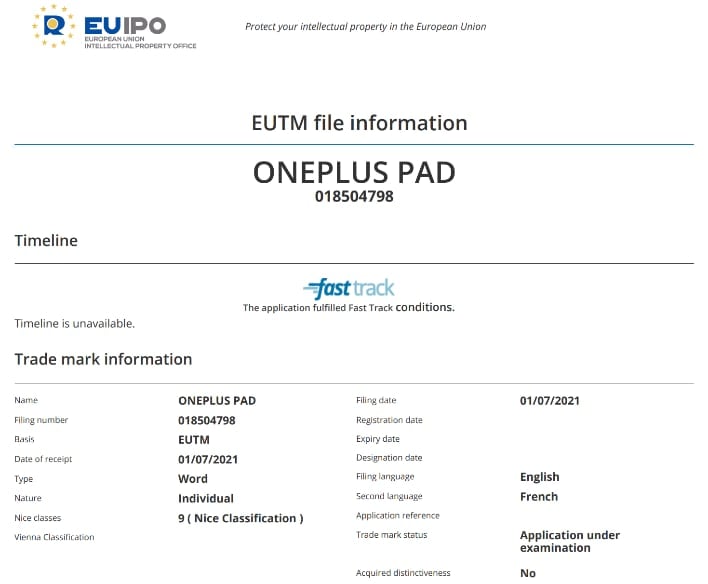 The only significant competitors left that sell Android-based tablets are Samsung and Lenovo, with the former having the most expansive family of products to choose from for consumers. However, given that OnePlus is already well established in the Android ecosystem with its long line of smartphones, it would make sense for the company to bring its OxygenOS-flavored version of Android to its tablets.

According to MySmartPrice, the publication that first uncovered the news, an official announcement from OnePlus is imminent. Until then, we're left to speculate about what kind of specifications that the OnePlus Tab will have. You can view the EUIPO listing here [PDF].

While Samsung sells tablets blanketing a wide variety of price points, we're more inclined to believe that OnePlus will target the Galaxy Tab S7 family. These tablets are available in 11-inch and 12.4-inch display sizes and launched last year with Qualcomm Snapdragon 865+ processors. So, we wouldn't be too surprised to see the OnePlus Tab launch with either the Snapdragon 888 or Snapdragon 888+ SoC under the hood, along with 12GB or more of storage available in 128GB, 256GB, and 512GB storage capacities at launch.

Again, this is all just speculation at this point, but hopefully, we'll hear more about the OnePlus Pad in the coming days and weeks.