No longer a rumor, OnePlus has confirmed it is launching a Nord 2 smartphone with 5G connectivity, though it will not be rocking a Qualcomm Snapdragon chipset like the first iteration. Instead, this will be the first OnePlus device to feature a MediaTek system-on-chip (SoC). Perhaps equally surprising, OnePlus is billing the MediaTek-powered Nord 2 as a "flagship killer."
We have seen that designation from OnePlus before, though it was in the company's earlier days when it aggressively sought to shake up the smartphone landscape. The OnePlus 2 was deemed such a phone—a flagship killer with premium features and high-end capabilities, at a delightfully much lower price than what a typical flagship costs.
That has not necessarily been the case in more recent times. For example, in our OnePlus Nord review, we called it an excellent 5G Android phone that offers an excellent value to consumers, but with its plastic mid-frame, lack of wireless charging, and mid-range chipset, it was never going to threaten top tier phones that cost twice as much.
So with that in mind, we're curious to see how the Nord 2 competes in a vast sea of smartphones, with its MediaTek innards and flagship killer designation. OnePlus said it worked with MediaTek to "push the limits" of the chipset with AI capabilities, which will manifest in AI-assisted imaging for better photos, display enhancements, better response times for smoother gaming, and more. 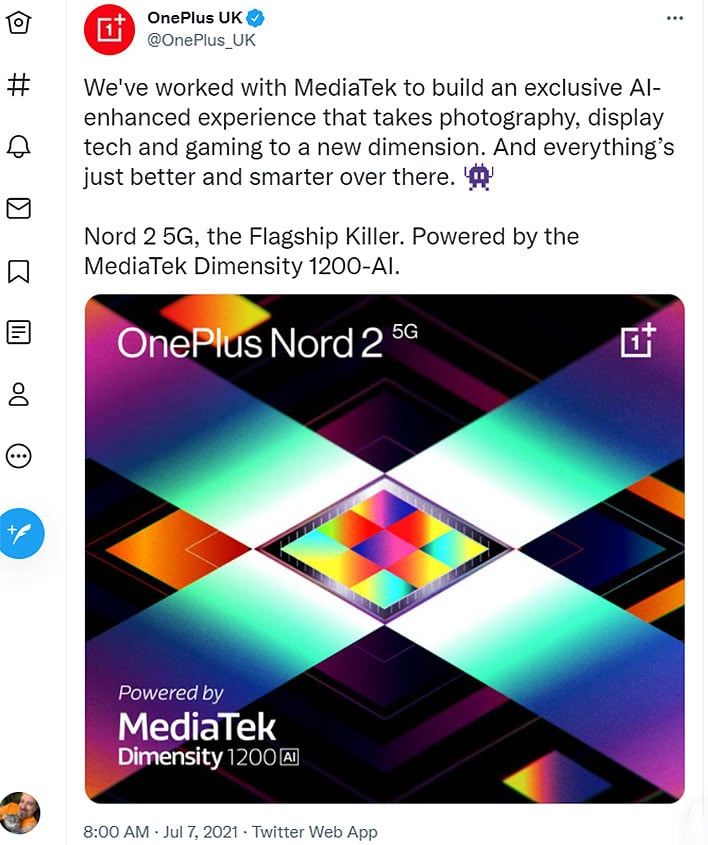 "We've worked with MediaTek to build an exclusive AI-enhanced experience that takes photography, display tech and gaming to a new dimension. And everything’s just better and smarter over there. 👾 Nord 2 5G, the Flagship Killer. Powered by the MediaTek Dimensity 1200-AI," OnePlus stated on Twitter.
In the discussion that followed, a user suggested that Qualcomm's Snapdragon 870 SoC would have been a better choice of the Nord 2, which prompted a response from OnePlus.
"We think our exclusive 1200-AI is absolutely mega, and hopefully you will too once more people have got their hands on it!," OnePlus replied.
That is an interesting statement. Several phones already utilize MediaTek's Dimensity 1200 chipset, though OnePlus has procured a custom variant with AI capabilities that it thinks will set the Nord 2 apart from the competition. Potentially better looking photos is one thing—and a big thing, really—but to be a true flagship killer, the Nord 2 will have to bring the boom at a savory price. To that end, OnePlus has not said when the Nord 2 will be available or how much it will cost.