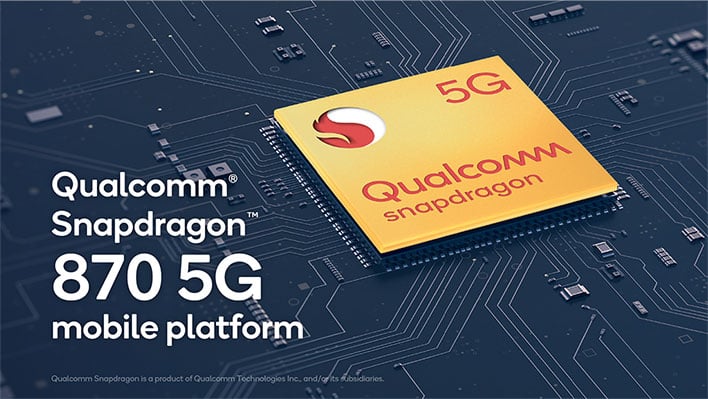 Qualcomm has given birth to a new Snapdragon SKU this morning. Meet the Snapdragon 870 5G, essentially a juiced up version of the Snapdragon 865 Plus, which will find its way into select premium Android smartphones. The newer SKU offers the same features and hardware as its sibling, but offers a higher top CPU clockspeed.
Like the Snapdragon 865 Plus, the newly unveiled Snapdragon 870 5G Mobile Platform (full name) is comprised of Qualcomm's Kryo 585 CPU, paired with an Adreno 650 GPU and Snapdragon X55 5G modem-RF system. However, OEMs will be able to squeeze a bit of extra performance out of the newer part—the performance cores in the CPU can hit 3.2GHz, up from 3.1GHz.
Granted, a 100MHz bump in CPU speed is not something you can move mountains with, but it does offer a bit of added performance. Perhaps more importantly, the Snapdragon 870 5G could find itself injected into less expensive 5G smartphones that lean into flagship territory.
"Building upon the success of Snapdragon 865 and 865 Plus, the new Snapdragon 870 was designed to address OEM and mobile industry requirements," said Kedar Kondap, vice president, product management, Qualcomm Technologies, Inc. "Snapdragon 870 will power a selection of flagship devices from key customers including Motorola, iQOO, OnePlus, OPPO, and Xiaomi."
The quote is telling, in that these companies have a large focus on what we'd call the premium value segment. OnePlus, for example, has built a reputation for building premium, flagship phones that are several hundred dollars less than some of the competition, as well as more value driven options like the OnePlus Nord. And it is one of the companies that has the Snapdragon 870 on its radar.
"By working closely with the world’s leading technology innovators like Qualcomm Technologies, we have been continuously building superior products and bringing premium mobile experiences to global users," said Kinder Liu, chief operating officer and head of R&D, OnePlus. "The flagship performance and exceptional 5G connectivity provided by the Snapdragon 870 5G Mobile Platform coupled with OnePlus’ unique innovative technologies and optimization, we look forward to delivering lightning-fast 5G speeds and ultra-smooth mobile experiences to more users."
This is also yet another chipset that will get 5G connectivity into more hands. Like the Snapdragon 865 Plus, the Snapdragon 870 touts a Snapdragon X55 modem-RF system, with support for mmWave and sub-6GH, with downlink speeds of up to 7.5Gbps and uplink speeds of up to 3Gbps.
Qualcomm says commercial devices based on the Snapdragon 870 will be announced this quarter.