For the first time ever, OnePlus is getting ready to launch a smartphone with built-in wireless charging support. While now a fairly standard feature on many smartphones, the upcoming OnePlus 8 Pro will be the first to feature wireless charging, with OnePlus putting its stamp on the technology with a 30W charging stand.
Yes, the OnePlus 8 Pro will also work with Qi wireless chargers, but the 30W stand OnePlus is readying will make quicker work of reviving an exhausted battery. How so? It will be capable of taking the capacious 4,500 mAh battery from 1 to 50 percent in only 30 minutes. That's much faster than the typical wireless chargers that are available for Apple's iPhone devices and Samsung's Galaxy handsets.
The folks at PhoneArena got their mitts on a set of press renders. It is a stylish design, as far as that is possible for a wireless charger, though it also looks a little chunkier than most. Part of that is to accommodate an integrated cooling fan. We imagine a 30W charger can run a little hot, so the fan should help with that.
While the renders are not confirmed to be official (they sure look to be real), the design is consistent with what OnePlus shared its in forum. OnePlus also confirmed a few key details. 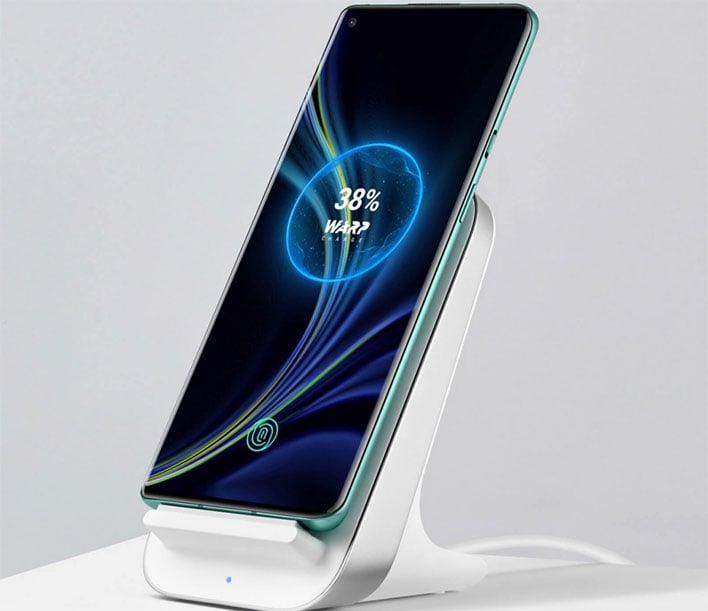 The company is dubbing the charger "Warp Charge 30 Wireless." To hit that 30W speed, OnePlus said it combined the industry's first isolated charge pump with the Warp wireless direct charging architecture. The result is an efficient design with less energy wasted as heat.
"The highly effective charge pump ensures a charge efficiency of 97 percent and minimizes the amount of energy converted into heat. Designed with similar functionalities to that of a kill switch, the isolated charge pump deactivates charging when abnormal currents and voltages are detected. This function helps to maintain a stable charge and keeps your phone safe while powering up," OnePlus explains.
Unfortunately, OnePlus has not yet confirmed a price. It's rumored the charger will sell for €70, which works out to around $76 in US currency. It's not cheap, but works much faster than a 5W Qi wireless charger, or one that supports a 10W EPP standard (both of which the OnePlus 8 Pro will be compatible with, the company confirmed).
Outside of the ultra-fast wireless charger, the OnePlus 8 Pro will feature a 120Hz display and is expected to debut with a Qualcomm Snapdragon 865 processor, three rear cameras plus a 3D depth sensor, 8GB or 12GB of LPDDR5 RAM, and 128GB or 256 of UFS 3.0 storage.
Images Courtesy of PhoneArena