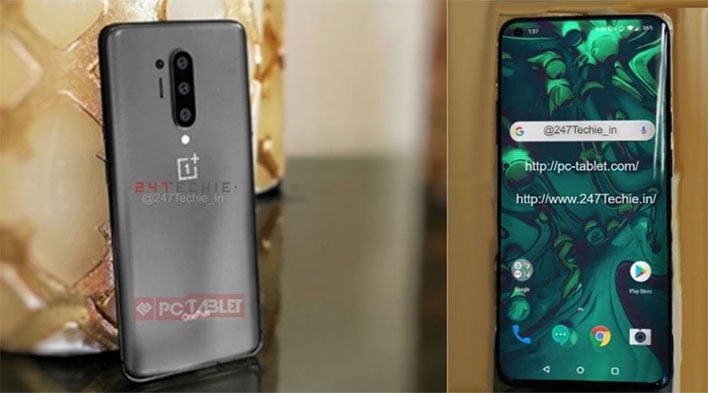 I will never fully understand why supposedly 'leaked' photos generally tend to be taken in poor lighting, are blurry, or are otherwise of crappy quality. Sure, it is entirely possible that these are controlled leaks, and manufacturers want to hold the final shots close to the vest, but why? Perhaps it is a question I will explore in depth at another date. For now, take a gander at a couple of leaked shots depicting the upcoming OnePlus 8 Pro.
Leaks and rumors related to the unreleased OnePlus 8 Pro have been working their way through the web for several months now, dating back to at least October of last year. That is when some renders emerged revealing a punch-hole design on the display, along with a quad camera arrangement on the rear of the handset.
The latest photos, pictured up top, show the actual phone and are not renders. Obtained by PC-Tablet from an unnamed source (OnePlus, perhaps?), they are blurry (par for course, unfortunately) and pixelated, as if taking a lower resolution photo and blowing it up. Despite the low quality nature of the shots, we do get to see the actual phone, assuming these are legit.
Once again, the punch-hole design for the front-facing camera is on display, positioned in the upper-left corner. The photos also highlight the curved edges, physical buttons on the both sides of the handset, and the quad camera configuration on the rear. As it pertains to the latter, the OnePlus 8 Pro wields three cameras in a vertical bump, with a fourth lens to the left and an LED flash below.
Let's talk specs, shall we? The photos do not offer up any big reveals, though past leaks and rumors tell a larger story. Here is what we know about the OnePlus Pro 8 (or think we know)...
The 120Hz refresh is a rate is a give, as OnePlus already confirmed as much. it will also ship with a 240Hz "screen sample rate," which likely means a touch sample rate (a frequency measurement of the touchscreen tracking the movement of a user's finger), and 5G connectivity.
These specifications set the stage for a showdown with Samsung's recently launched Galaxy S20 family, and it will be interesting to see how they compare.

As to the leaked photos above, they are consistent with the partial glimpse offered up Robert Downey Jr., in what was undoubtedly a controlled photo shoot.
Regarding the phone's release, going by last year's time frame, the OnePlus 8 Pro could see a launch in April or May. That's assuming there is no significant delay due to the coronavirus pandemic.