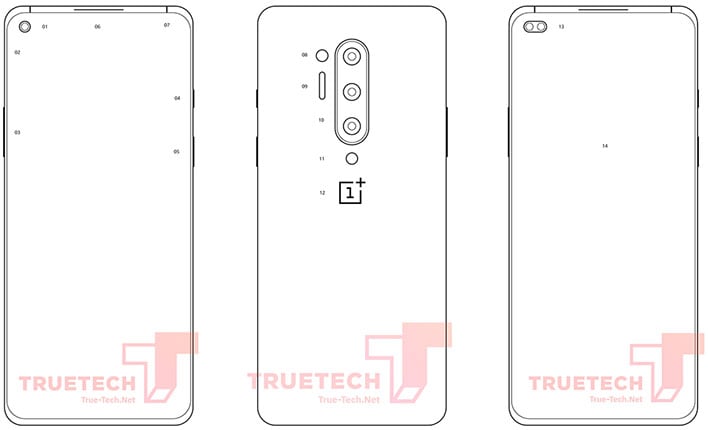 It's only been a couple of months since we posted a review of the OnePlus 7T, but in the time that has elapsed, there have been numerous leaks and rumors centered on the unannounced OnePlus 8 Pro. If you were hoping for a reprieve from another leak today, well, our apologies. Instead of a reprieve, you get some diagrams to look at.
The diagrams are mostly in line with previously leaked renders, so there's not a lot that is new. However, they do outline (quite literally) some changes OnePlus is making to its next flagship phone, assuming these are legit.
Perhaps the most interesting (to some people) is the pill-shaped cutout in the front of the handset. The OnePlus 7T debuted with a teardrop notch similar to the one that started it all (Andy Rubin's Essential Phone), and both the OnePlus 7T Pro and OnePlus 7 Pro sport a motorized pop-up camera for snapping selfies.
One of the supposed design documents lists the selfie camera implementation as "tentative," though the idea of using a punch-hole cutout is consistent with past leaks.
Around back, the diagrams show a triple camera configuration arranged vertically, flanked by a fourth sensor of some sort to the left. This is listed in one of the documents as a Time-of-Flight sensor to aid with 3D depth sensing chores (also "tentative").
Outside of the camera configuration, the diagrams seemingly confirm the same button layout as the previous flagship. Unfortunately, none of the documents get into the nitty-gritty details, such as panel size and resolution, internal hardware, and so forth. That said, one of the rumors floating around is that the OnePlus 8 Pro will feature a 120Hz display.
We will find out soon enough how these leaks stack up to the final product, as the OnePlus 8 Pro is expected be be unveiled on January 23, 2020.