It looks like the US-bound OnePlus 11 5G will be arriving mostly unchanged from the Chinese market version, apart from lower charging speeds. I think OnePlus took it literally when its fans asked it to charge less for the phone when it decides to sell the device here.

Over on Twitter, frequent tipster SnoopyTech hinted that the OnePlus 11 will be a beast of a machine when it arrives. As we reported before, the phone will possess the upgraded Snapdragon 8 Gen 2 paired with up to 16GB RAM. The SD 8 Gen 2 has so far shown that it runs rings around the previous generation's 8+, especially in multi-core and graphics performance, while being more energy efficient overall.

Where the spec sheet is claimed to differ from the global market OnePlus 11 is the battery charging speed. The rest of the world will get 100W SuperVOOC charging, while the US settles for 80W SuperVOOC. We expect the 5000 mAh battery capacity to remain the same, but we don't think consumers will have much to worry about in terms of charge times. In the past, OnePlus pulled the same stunt with the 10T (125W instead of 150W) and 10 Pro (65W instead of 80W), and most users found that 0-100% charge times varied only by a few minutes. Sure, it's not great news, but thankfully, most US users won't even realize what they're missing. 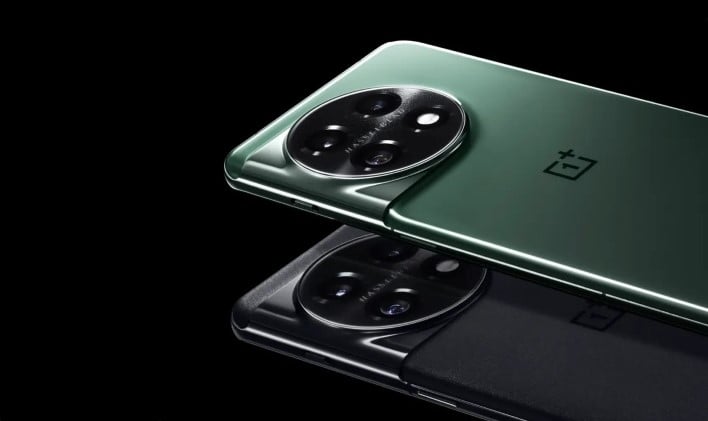 The rest of the OnePlus 11 is nothing to sneeze at—we can't wait to get our hands on one for a review. Up front there's a 6.7-inch 2K AMOLED with 120Hz refresh rate of the Samsung LTPO 3.0 variety, which means it can vary the refresh rate from 1 to 120Hz. Image capture will be handled by a triple camera setup with Hasselblad branding and tuning, plus support for RAW captures. It's made up of a 50MP Sony IMX980 primary shooter, 48MP Sony IMX581 ultrawide (doubling also as a macro with 3.5cm shooting distance), and 32MP Sony IMX709 portrait sensor with 2x optical zoom.