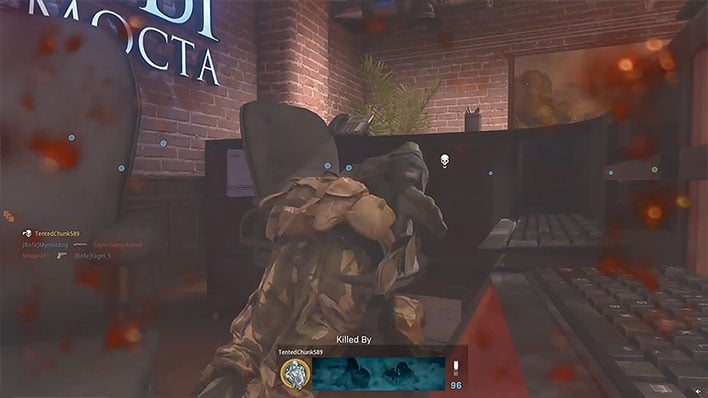 The office can be a dangerous place. Forget about office politics, have you ever stubbed a toe on a file cabinet, threw out your back restocking the water cooler, or been attacked by a spinning chair? Our condolences if you answered "yes" to all three. Before you dismiss the latter as an actual workplace hazard, however, a clip of a murderous chair in Call of Duty: Modern Warfare, should serve as a cautionary tale.
Okay, maybe office chairs have never spun so hard that they actually killed someone (I don't have any stats on this). However, a user on Reddit discovered a hilarious glitch in which two spinning chairs inside the hotel of the St. Petrograd map can mortally wound players. Just colliding with either of the apparently demonically possessed chairs will cause an insta-death to the unlucky fellow who is bumbling about. Have fun writing that obituary.

Note to self—steer clear of hotels in St. Petrograd. Between this and the movie Hostel, I'm starting to develop an irrational fear of international hotels. You might too, after watching this clip...

You can commit death on the spinny chairs on St. Petrograd from r/modernwarfare


I'm assuming this is a glitch, anyway, and hopefully not something the developers encountered in real life and then decided to program into the game. The thing is, I just upgraded my office chair at home (Maingear's Forma R) and threw my old one away. Does this mean the one I tossed by the dumpster might return to hunt me down? I assumed one of the neighbors snatched it after it disappeared before trash was picked up, but oh dear...
Rather than lose any sleep over this, I'm just going to assume it's a bug that Infinity Ward simply missed this during development. And if that's the case, I vote they leave it as-is rather than patch it out with a future update.