NVIDIA's first introduction of Ampere was as a machine learning, the A100 built on a 7-nanometer manufacturing process, followed by the GeForce RTX 30 series for consumers, with GPUs built on Samsung's 8nm node. What comes next? It looks like Ampere will trot on over to NVIDIA's Quadro line of professional graphics cards, with some meaty specifications.
Ampere is off to a wild start, that is for sure. The A100 reveal was neat, but the GeForce RTX 30 series stole the spotlight, with NVIDIA claiming big gains in performance at relatively attractive price points. If the claims are true, the $499 GeForce RTX 3070 will be faster than the previous generation $999 GeForce RTX 2080 Ti. 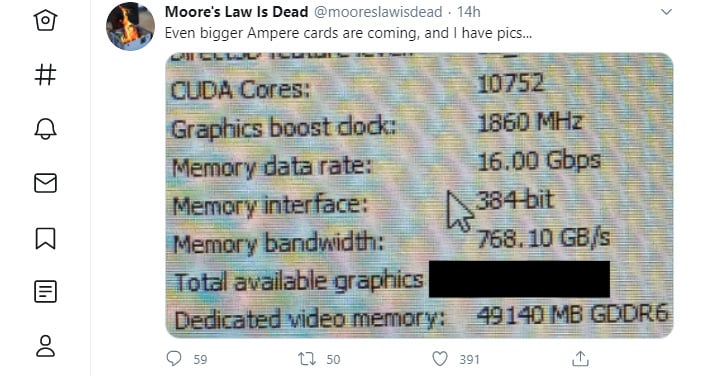 As for making an appearance in the Quadrop lineup, leaker @mooreslawisdead posted a screenshot of the NVIDIA Control Panel indicating a GPU with 10,752 CUDA cores and 48GB of GDDR6 memory running at 16Gbps on a 384-bit bus, resulting in 768.10GB/s of memory bandwidth. It also shows a 1,860MHz boost clock.
In the Twitter thread, someone asked if this shows a Quadro or Titan part, to which the leaker replied, "Quadro, but Titan is coming baby."
It is an interesting claim because, at least for the time being, NVIDIA has opted to drop its "Titan" nomenclature and release the GeForce RTX 3090 in its place. NVIDIA was clear about considering the GeForce RTX 3080 is flagship SKU for consumers, while pitching the GeForce RTX 3090 as being a potent part for creators, like previous generation Titan cards.
What's also interesting is the use of GDDR6 memory instead of GDDR6X on the Quadro part. Though as for the amount of memory, it is consistent with some past leaks, specifically for a supposed Quadro RTX A8000 model.
Here is a quick comparison of specs between the leaked Quadro Ampere and the GeForce RTX 3090...
We're looking at 256 more CUDA cores and a higher boost clock, with twice the amount of memory, albeit GDDR6 instead of GDDR6X. Going with GDDR6 seems to be the only choice right now, since nobody makes 2GB (16-gigabyte) GDDR6X chips.