Earlier this morning, Micron let it slip that NVIDIA's upcoming GeForce RTX 3090 Ampere graphics cards will ship with 12GB of GDDR6X memory. According to Micron's documentation, the GeForce RTX 3090 will be capable of achieving 1TB/sec of memory bandwidth.

However, that's not all that Micron had in store via its Tech Brief, which is inexplicably still hosted on its server. Also mentioned is HBMnext, and Micron says that it is "fully involved in the ongoing JEDEC standardization" for the memory. Unfortunately, the company is rather light on details, only adding that it will "enter the market toward the end of 2022".

It's not clear if HBMnext is a complete rethink of Micron's approach to High Bandwidth Memory, or if it is simply a rebranding of what we would expect from a what might have been called HMB3. Whatever the case, we expect further ramping of performance while reducing power consumption (which is the primary goal of each successive generation of memory products). 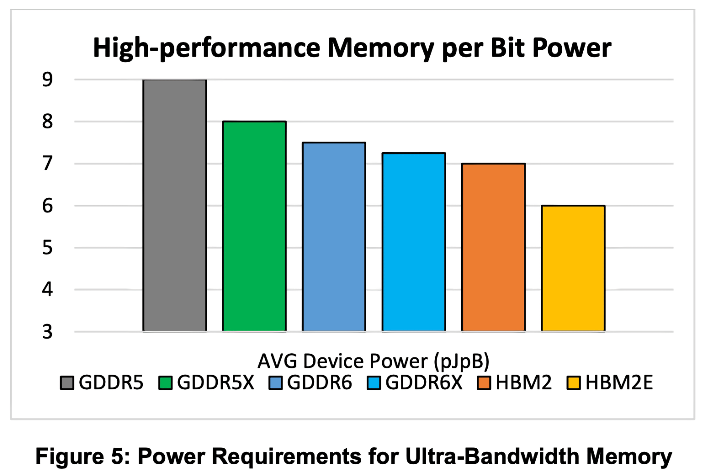 Speaking of power consumption, Microsoft has provided a handy little chart that you can see embedded above that shows the average device power of memory products that Micron offers, with GDDR5 being the thirstiest of them all. HBM2e is roughly 33 percent more power efficient than GDDR5, and we would expect HBMnext to further drive those numbers down.

Micron goes on to indicate that its first HBM2e products will begin shipping prior to the close of 2020, and that there will be both 4- and 8-layer designs providing 8GB and 16GB memory capacities respectively. It's stated that HMB2e products will be able to hit 3.2Gb/sec speeds and "potentially higher" with subsequent revisions (Samsung can hit 4.2GB/sec with its proprietary circuit design).

Given the pricing premium that we see for HBM compared to solutions like GDDR5, GDDR6 and GDDR6X, it’s likely that HBM2e -- and eventually HBMnext -- will continue to be relegated to the high-end GPU accelerators for the datacenter and scientific markets.