In response to customer demand for high-performance, green data centers, NVIDIA is releasing a liquid cooled version of its A100 Tensor Core PCIe accelerator based on its Ampere GPU architecture. This will be the first in a growing line of GPUs with direct-chip cooling for mainstream servers, which has the potential to drastically increase energy efficiency in the data center.
Data center efficiency is typically represented by its Power Usage Effectiveness (PUE), a ratio that is the result of dividing the total amount of power drawn by the power used to run just the IT equipment. The goal is to get the PUE rating to as close as 1.0 as possible. According to NVIDIA, liquid cooled GPUs for servers can help achieve that.
Liquid cooling in the data center is a not a new concept by any stretch, but what NVIDIA is doing here is offering its own reference design in a single slot solution with a pair of tubing connectors on the rear. 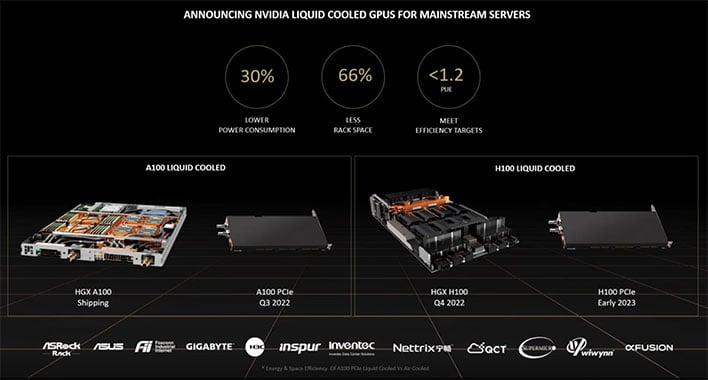 NVIDIA is working with Equinix to to qualify the 80GB version of its A100 PCIe GPU in liquid cooled form for its data centers. In separate tests, both NVIDIA and Equinix estimate that a data center using liquid cooling could run the same workloads as an air-cooled facility while consuming 30 percent less energy. That could drop the PUE from 1.6 to just 1.15.
"Liquid-cooled data centers can pack twice as much computing into the same space, too. That’s because the A100 GPUs use just one PCIe slot; air-cooled A100 GPUs fill two," NVIDIA says.
NVIDIA also see this as another point in favor of using GPUs over CPUs for AI and high performance computing (HPC) workloads. According to NVIDIA, if you switched all the CPU-only servers running those workloads to GPU-accelerated systems, it would save a staggering 11 trillion watt-hours of energy a year. That's equivalent to what 1.5 million consume each year.
The liquid cooled A100 is sampling now and will be generally available this summer. To that end, NVIDIA says at least a dozen partners plan to incorporate these GPUs into their products later this year, including ASUS, ASRock, Foxconn, Gigabyte, Supermicro, and others. Additionally, NVIDiA says it will give the same liquid cooling treatment to this H100 Hopper accelerator next year.