Whether you will actually be able to find them in stock or not, NVIDIA is supposedly on the cusp of launching as many as three new GeForce RTX 3000 series graphics cards, including a GeForce RTX 3090 Ti. Should that come to pass, it would supplant the non-Ti version as NVIDIA's flagship consumer gaming GPU.
Speaking of which, it may seem pointless from a consumer perspective to launch more cards when existing ones are always sold out. But from a manufacturer's perspective, that's precisely the point—in reality, the cards are selling as quickly as NVIDIA and its add-in board (AIB) partners can make them. After all, NVIDIA is coming off a $7.1 billion quarter, in which the lion's share of its revenue ($3.2 billion) came from its 'Gaming' sector.
In any event, the GeForce RTX 3090 Ti is rumored to arrive with 24GB of GDDR6X memory from Micron clocked at 21Gbps, up from 19.5Gbps on the non-Ti model. That would bump the memory bandwidth up by 8 percent to just over 1TB/s.
Past leaks also suggest the GeForce R TX 3090 Ti will wield 10,752 CUDA cores, up from 10,496 in the non-Ti model. If true, it will have more grunt all around, potentially at the expense of power draw—another rumor suggests it will be a power-hungry beast with a 450W TDP.
As for its release, the folks at Videocardz say they got their hands on a GeForce Desktop Embargo sheet that points to the GeForce RTX 3090 Ti landing on store shelves on January 27, 2022. 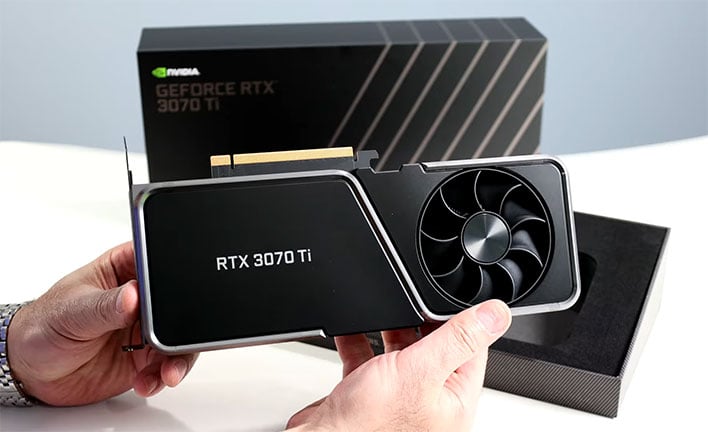 The same folks also have a bead on upcoming launches for two more rumored cards, the GeForce RTX 3070 Ti with 16GB of memory and the GeForce RTX 3050.
There's already a GeForce RTX 3070 Ti in the Ampere product stack, which has 8GB of GDDR6X memory tied to a 256-bit bus, for 608GB/s of memory bandwidth. However, there's chatter of an upgraded version with twice as much memory being in the pipeline (CUDA cores will stay the same). More than just chatter, Gigabyte seemingly confirmed its existence when registering a bunch of SKUs with the Eurasian Economic Commission (EEC).
That card will supposedly be announced on December 17, followed by a retail release on January 11.
Finally, there's unofficial talk of a GeForce RTX 3050 being announced on January 4 at the Consumer Electronics Show. It's not clear when it will release to retail, though.
The card is said to feature a GA106-150 GPU, possibly with 3,072 CUDA cores. It is also expected to arrive with 8GB of GDDR6 memory tied to a 128-bit bus width. And while no pricing info is available, as the lowest tier in the GeForce RTX 30 series it will obviously be the most affordable card of the bunch, at least in terms of the MSRP (street pricing is another story).