We still have just over a week to go before NVIDIA's GeForce RTX 4080 releases to retail (the real one rather than the version that could make a comeback as a GeForce RTX 4070 Ti). In the meantime, a user on Twitter has shared a few high-resolution photos of the printed circuit board (PCB) on the Founders Edition (FE) model for all to gawk at. It's been stripped of its cooling shroud, giving us a detailed view of the scintillating slab of silicon that sits underneath.
At a glance, the PCB looks similar to the one used for NVIDIA's flagship GeForce RTX 4090, as both feature a unique design with a triangle-shaped cutout on the right-hand side. Both also sport a 16-pin 12VHPWR power connector. That said, there are some key differences between the two PCB layouts, and of course they employ different GPUs. 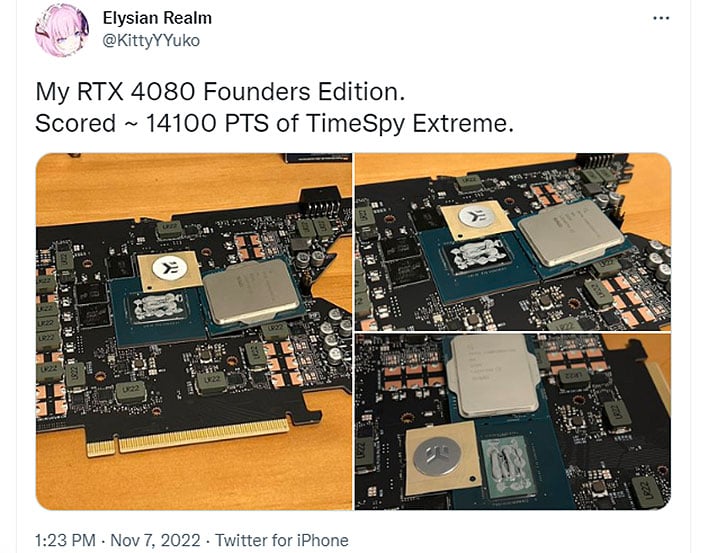 What stands out the most is the tamer voltage regulator module layout. Some of the VRMs are hidden underneath an Intel CPU that's been plopped on the card, most likely to help hide some identifying markings given that this is a leak. However, it appears there are half as many as found on the GeForce RTX 4090, which touts 23 power phases (20 for the GPU, 3 for the memory).
There are fewer capacitors on the GeForce RTX 4080 FE as well, according to photos shared to Twitter by Elysian Realm (@KittyYYuko). This is not unexpected. The rated graphics card power for the GeForce RTX 4080 sits at 320W, versus 450W for the GeForce RTX 4090.
Only partially visible in the naked photo shoot are the eight 2GB GDDR6X memory modules that surround the GPU, for 16GB of total memory linked to a 256-bit bus width. We say partially visible because in addition to the CPU loitering on the PCB, there's also an EKWB sticker that's covering up a couple of the Micron memory modules.
According to the leaker, this card achieves 14,100 points in 3DMark's TimeSpy Extreme test. That's on par with other leaks, and if it holds up, it suggest the GeForce RTX 4080 will outpace NVIDIA's previous generation flagship, the GeForce RTX 3090 Ti.
Look for the GeForce RTX 4080 to release to retail on November 16, 2022.
Top/Thumbnail Photo Source: @KittyYYuko via Twitter