September can't arrive fast enough, at least not for those of use who want to see what exactly NVIDIA will be unveiling for its next round of graphics cards. Here in the home stretch, however, more leaks and rumors continue to flood the web. This time it's a set of certifications at the Korean National Radio Research Agency (RRA) website for what are presumed to printed circuit board (PCB) designs for the GeForce RTX 3090 and GeForce RTX 3080.
NVIDIA has been known to the use the same PCB for multiple graphics card models, depending on which ones they are. In this case, here is what we are looking at... 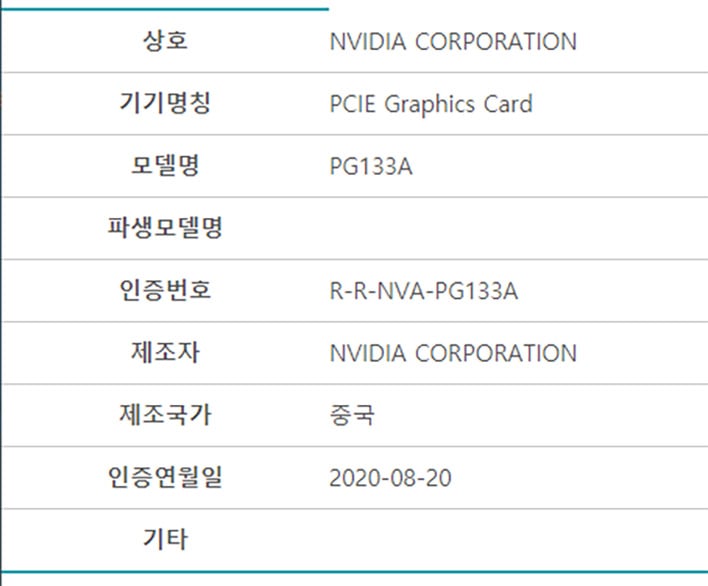 The board is labeled as "R-R-NVA-PG133A" by NVIDIA Corporation, published today. Apparently this kind of certification is the one of the last steps before an actual product ships, and the timing certainly aligns with a scheduled "GeForce Special Event" on September 1, 2020. That is when NVIDIA will undoubtedly unveil its next-gen graphics cards, based on Ampere.
AS for the PG133A board in the listing, it was mentioned by prominent leaker and Twitter user Kopite7kimi, who references three boards being used for NVIDA's GA102 GPU. They include the PC133, PC136, and PG132.
According to Kopite7kimi, the PG132 board will be used by NVIDIA's hardware partners for their own custom models, whereas the PC133 and PC136 will be reserved for NVIDIA's own Founders Edition models. It is all speculation though, and will of course have to wait and see what actually materializes.
That said, the GeForce RTX 3090 is rumored to offer a big jump in performance over NVIDIA's Turing cards, with perhaps as much as 24GB of GDDR6X memory. It's also been rumored to carry a $1,399 starting price tag, and $1,499 for the Founders Edition model, but like everything else, those details have not been confirmed.