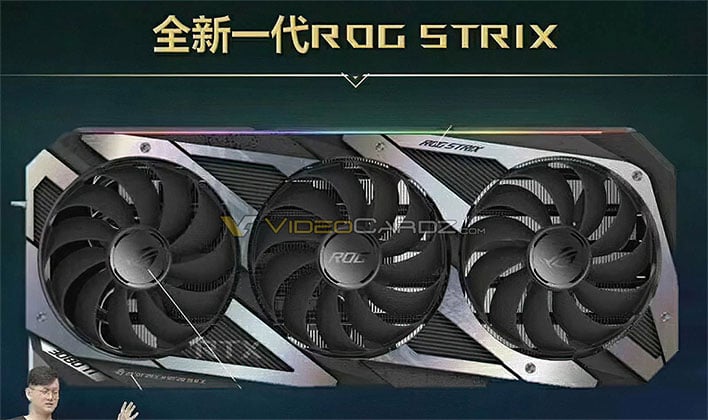 It is confirmed, folks, go ahead and bet the farm on NVIDIA releasing a GeForce RTX 3080 Ti graphics card in the near future, it is definitely, without a doubt, for sure going to happen. Yep. Probably so. Well, it is certainly likely. Okay, maybe it will happen? Hmm, perhaps you should hold on to the deed to the farm a little longer. However, a supposedly leaked presentation slide seemingly indicates ASUS is working on a custom variant of the rumored part, as shown in the image above. So, there's that.

In case it is not obvious by the watermark, the folks at Videocardz got their mitts on the photo. The site believes it was taken during an internal meeting at ASUS to discuss possible designs for NVIDIA's upcoming crop of graphics cards based on Ampere, this being a triple-fan cooler with a silver and black color scheme. What it is depicted may or may not actually make it out the door.
What is interesting, however, is the "3080 Ti" designation at the front of the card, towards the bottom. While not an outright confirmation, it is another hint that a GeForce RTX 3080 Ti is indeed in the works. The question is, will it be the top offering, assuming the presentation photo is both real and indicative of what is to come?
That is tough to answer. ASUS reserves its "ROG Strix" branding for it most decked out graphics cards, though not necessarily for only the highest SKU within a GPU series. For example, there are ROG Strix variants of not only the GeForce RTX 2080 Ti within the Turing stack, but also lower end models, like the GeForce RTX 2060 Super and even the GeForce GTX 1660 Ti.
Ampere leaks and rumors have been coming in fast and furious lately. To be clear, NVIDIA officially introduced Ampere already, though so far in high performance computing (HPC) form only—consumer variants have yet to launch.
Here is the potential lineup of three GPUs, along with how they compare to existing Turing parts...
These are all significant upgrades, if things shake out like that. We won't know until NVIDIA formally introduces its next round of graphics cards, which we anticipate happening within the next few months (perhaps August or September).