The month of March is cruising right along, and as more time passes, we get increasingly closer to NVIDIA's next-gen GPU launch. Otherwise known as Ampere (unless NVIDIA announces a different name for the consumer variant), the bulk of information out there right now is all related to leaks and rumors, and here is another one for the growing pile.
According to YouTube channel Moore's Law Is Dead, an engineering sample of a GeForce RTX 3080 Ti sports a cooling shroud that is similar to the Founders Edition models of the GeForce RTX 20 series, but with three cooling fans and less screws on the back of the card. Assuming the YouTuber is now blowing smoke up our rear ends (and we're not ruling that out by any stretch), an engineering sample may or may not be indicative of the final product.

He also claims the card features a pair of 8-pin PCI Express connectors, whereas engineering samples for Turing cards supposedly had three of them. The insinuation here is that Ampere cards will use less power than their Turing counterparts. The cards also feature five I/O ports, including three DisplayPort 2.0 connectors, an HDMI 2.0 port, and a USB-C port. It's also said to feature a PCIe 4.0 interface.

Now here is where things get interesting. The YouTuber says NVIDIA keeps a tight lock on what kind of data its own employees can see when working with engineering samples, but even so, his source supposedly was able to dig up some details about the GA102 GPU inside the GeForce RTX 3080 Ti. 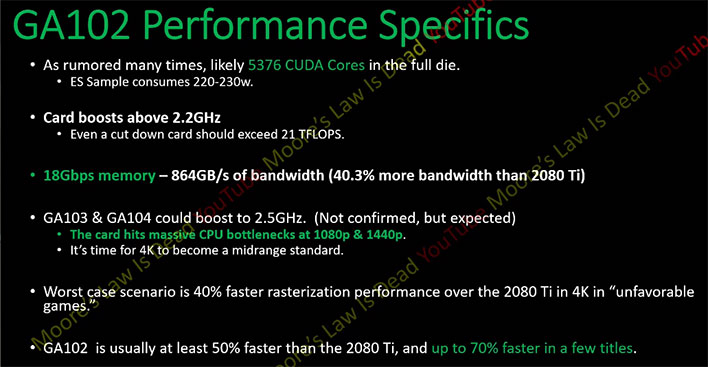 According to the leak, the full-fat GA102 is armed with 84 streaming multiprocessors and 5,376 CUDA cores. On the GeForce RTX 3080 Ti engineering sample, this is said to be paired with 12GB of memory running at 18Gbps on a 384-bit bus, yielding 864GB/s of memory bandwidth. That is a massive 40.3 percent jump over the current generation GeForce RTX 2080 Ti.
He also claims the card boosts to 2.2GHz, and reckons that even a cut down version would deliver 21 TFLOPS of performance, while consuming 220-230W.
What this all boils down to, according to the leak, is a card that offers at least a 40 percent increase in rasterization performance at 4K, compared to the GeForce RTX 2080 Ti. In addition, the YouTuber supposes the GA103 and GA104 will essentially make the CPU a bottleneck at 1080p and even 1440p gaming, with 4K becoming a "midrange standard." We'll see about that. 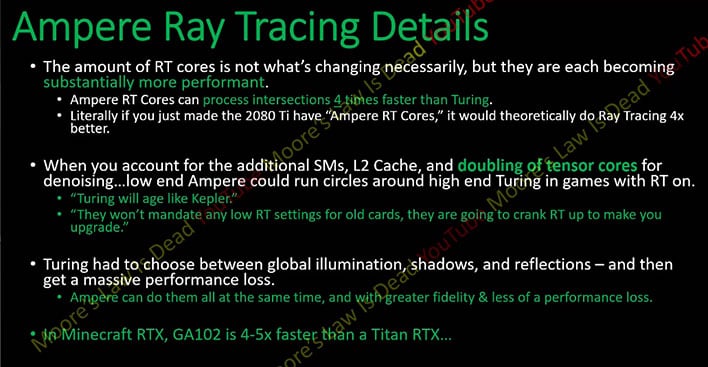 The YouTuber also talked about some other details, including ray tracing hardware. According to his engineering source, the number of RT cores may not change with Ampere, but they will be "substantially" more powerful than the ones used in Turing.
To put it into perspective, he says if someone plucked the RT cores form Ampere and injected them into Turing, then the GeForce RTX 2080 Ti would theoretically offer four times faster ray tracing performance.
He also says NVIDIA will be doubling the number of Tensor cores, so that lower end Ampere cards will vastly outperform higher end Turing cards in ray-traced and DLSS workloads.
The last bit of supposed info he shared is that Ampere will deliver a "solid" increase in IPC performance over Turing with double the L2 cache and higher core clocks, DLSS 3.0 will be a big upgrade over DLSS 2.0 (but "isn't a magic performance boost"), and the use of Tensor memory compression will effectively make a 12GB Ampere card perform like it is a 16GB card.
It's quite a bit to take in, and quite frankly, it could all be nonsense. Likewise, there might be some truth to the rumor. All we can do is wait and see.