Don't stop us if you've heard this one before—there is a leak related to NVIDIA's upcoming Ampere GPU! We know, we know, that's not exactly shocking. But even if you're suffering from leak-fatigue, it's worth checking this one out. The leak supposedly outlines some basic specifications and performance data, and that's where things get interesting.
As a quick refresher, Ampere is rumored to be NVIDIA's next-generation GPU. There's not really much in the way of official information, but past rumors suggest it will deliver a big performance uplift over Turing, and at half the power draw. It's also said Ampere will represent a shift to a 7-nanometer manufacturing process.
Getting back to the leak, Twitter user _rogame uncovered a couple of Geekbench entries for "two unknown NVIDIA GPUs." One is listed as having 7,552 CUDA cores, 118 compute units (CUs), a 1.11GHz clockspeed, and 24GB of memory. The second one has 6,912 CUDA cores, 108 CUs, a 1.01GHz clock, and 47GB of memory.
Geekbench is almost definitely misreading the memory arrangement on the latter part. Whether the other specifications are accurate, there is just no way of knowing right now. However, based on prior rumors, neither of these represent a full fat version of Ampere, which is said to have 8,192 CUDA cores at the top end. 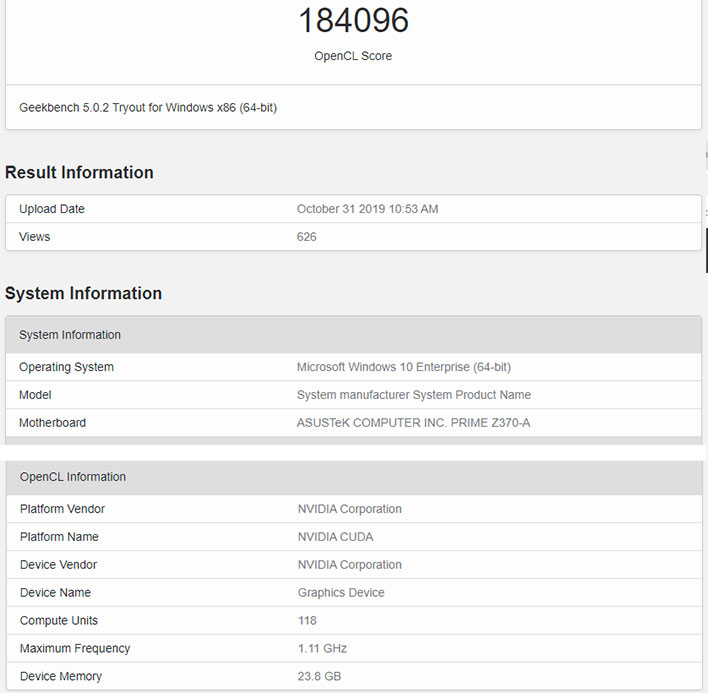 The bigger of the two posted an OpenCL score of 184,096 in Geekbench 5. That doesn't mean much by itself, but if we compare to the number to what current cards score, well, there is reason to be excited. Here's some reference data...
Assuming this is a consumer part, the Titan RTX comparison is the most interesting. The leaked Ampere GPU is nearly 39 percent faster, based on this solitary benchmark. It's also a good clip faster than a Tesla V100.
The GPU with 6,912 CUDA cores posted an OpenCL score of 141,654 on Geekbench 5. That's just a hair under 7 percent faster than a Titan RTX. For reference, a Titan RTX features 4,608 CUDA cores, a 1,770MHz boost clock, and 24GB of GDDR6 memory linked to a 384-bit memory bus (for 672GB/s of memory bandwidth).
There's no way this GPU is shipping with 47GB of memory, but it's still encouraging to see a 'lower end' Ampere part (relatively speaking) still outpacing the mighty Titan RTX. Will it play out that way? We'll have to wait and see—it's possible NVIDIA will at least announce Ampere at GTC next month.