Apparently, there was some truth to those early rumors, as someone in Russia obtained a Gigabyte Aorus GeForce RTX 3080 Ti Gaming OC 20G that somehow made it onto the retail market. The card came from a retailer in St. Petersburg, Russia, with a price tag of 225,000 rubles (around $3,100) versus a $1,199 asking price for the standard GeForce RTX 3080 Ti. 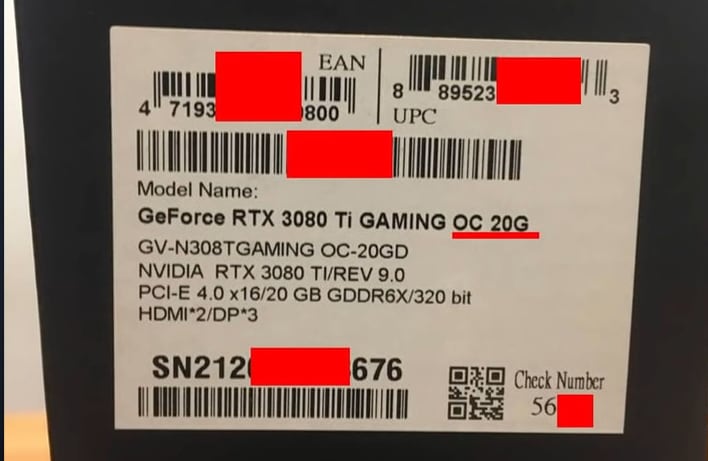 There are some interesting differences between the GeForce RTX 3080 Ti that officially launched and this "missing link" card making the rounds in Russia. First, despite having more memory available, the Gigabyte card is saddled with a 320-bit memory interface instead of 384-bits. As a result, its maximum memory bandwidth takes a nosedive from 912 GB/sec to 760 GB/sec.

Another more damning aspect of the Aorus GeForce RTX 3080 Ti Gaming OC 20G is that since it isn't an "officially" marketed card, NVIDIA has no current driver support. So if you were hoping to get some comparative GPU gaming benchmarks, that simply isn't going to happen. The only thing that the Gigabyte card is good for at the moment is Ethereum mining, which brings us to the next big difference compared to standard GeForce RTX 3080 Ti graphics cards.

The Aorus GeForce RTX 3080 Ti Gaming OC 20G doesn't come with a cryptocurrency limiter like NVIDIA's most recent graphics cards, which are Light Hash Rate (LHR) enabled. As a result, the 20GB card was able to hit an alleged ETH hash rate of 94.04 MH/s versus the standard GeForce RTX 3080 Ti, which is artificially limited to around 60 MH/s (or slightly higher optimized).

While we're intrigued by the appearance of these new 20GB cards, our excitement is tempered by the lack of suitable drivers to use it for its intended purpose: as a gaming card. However, if you're a Russian crypto mining enthusiast, now's your chance to snap up one of these rare cards that probably should have never made it out of the factory in the first place.