As we have said before, where there is smoke there is usually fire, right? And there has been a fair amount of smoke related to a rumored graphics card joining NVIDIA's latest generation lineup, based on Ampere. That would be the GeForce RTX 3080 Ti, essentially a beefed up version of the GeForce RTX 3080, with twice the amount of GDDR6X memory (20GB). Adding to the smoke are some leaked benchmark runs purportedly showcasing the unannounced GPU.
It seems like an inevitability that NVIDIA will launch Ti variants of its higher end cards. Oddly enough, in the GeForce RTX 3060 tier, NVIDIA released the GeForce RTX 3060 Ti first, followed by a GeForce RTX 3060 (non-Ti) later, with the regular version actually having more memory than the Ti model (12GB versus 8GB, both of the GDDR6 variety).
So NVIDIA can be unpredictable, is the point. For reference, the existing GeForce RTX 3080 is built around NVIDIA's GA102-200 GPU with 8,704 CUDA cores, 272 texture mapping units, 96 ROPs, 272 Tensor cores, 68 RT cores, and 10GB of GDDR6X memory (19Gbps) on a 320-bit bus. At stock, the card has a 1,440MHz base clock and 1,710MHz boost clock.
How the GeForce RTX 3080 Ti compares across the board remains to be seen, and for the moment, we are left to sift through leaks and rumors to paint a potential picture of the card. And it starts with the model name—Bilibili posted a video of what is identified by GPU-Z as a GeForce RTX 3080 with 20GB of GDDR6X. There is no Ti designation, which leaves open the possibility that this could be dubbed a GeForce RTX 3080 Super, or something along those lines. 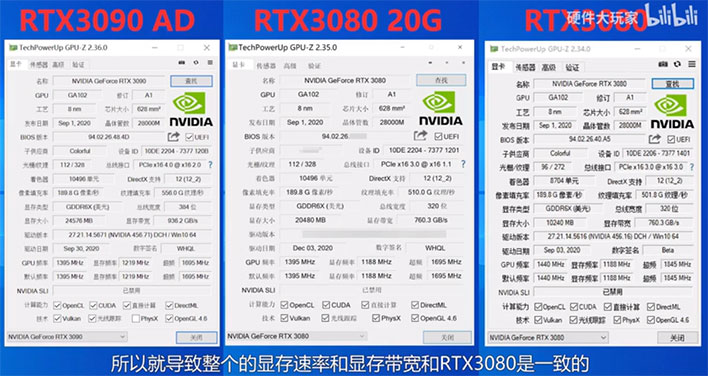 Either way, we have a few supposed specifications to share, from a GPU-Z shot. Keeping in mind that it is easy to rig these things, the screenie shows the Geforce RTX 3080 Ti/Super as having 10,496 CUDA cores, 328 TMUs, and 112 ROPs. It also indicates 20GB of GDDR6X memory on a 320-bit bus. Base and boost clocks are listed at 1,396MHz and 1,695MHz, respectively.
So if this is to be believed, the upcoming card will have the same number of CUDA cores as the mighty GeForce RTX 3090, but with less memory, a narrower memory bus, and presumably fewer RT cores. We'll see.
As to how this translates into performance, the site ran through some 3DMark benchmarks... 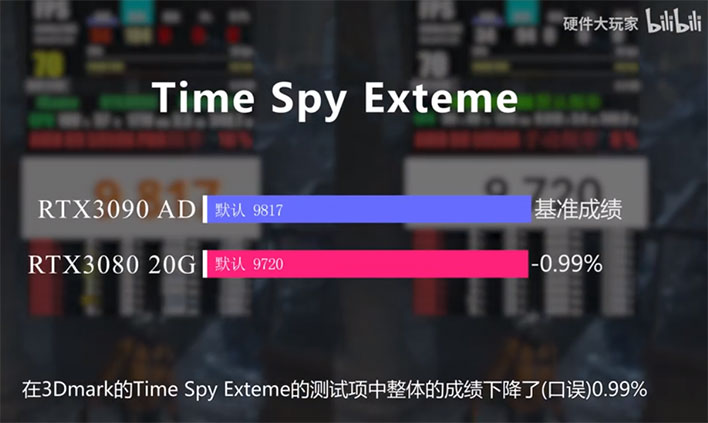 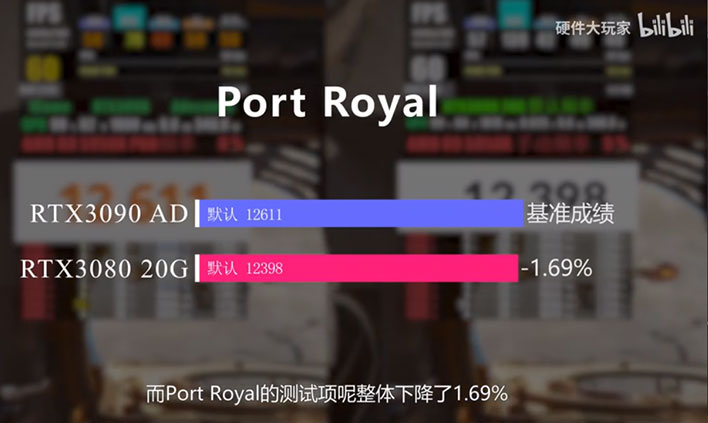 Compared against the GeForce RTX 3090, the supposed GeForce RTX 3080 Ti/Super was mostly able to hang. It was around one percent slower in Time Spy Extreme, which is a negligible difference, and less than 2 percent slower in Port Royal. The site saw the biggest disparity in Fire Strike, in which the GeForce RTX 3080 Ti/Super scored 7.71 percent lower.
This will be an interesting card, depending on when it lands, what availability looks like, and how pricing shakes out. Those questions will be answered in time. It's rumored for a February launch, which is right around the corner.