There is some new evidence to suggest NVIDIA is close to launching a new Ampere product, and specifically the oft-rumored GeForce RTX 3080 Ti, with more onboard memory than the non-Ti variant. It comes by way of leaked photos showing pallets of MSI-brand graphics cards being prepped for shipment, from China to the United States.
This is the latest in a long line of leaks pointing to the impending launch of a GeForce RTX 3080 Ti. Another one of NVIDIA's add-in board (AIB) partners, Gigabyte, recently listed a dozen custom GeForce RTX 3080 Ti models with the Eurasian Economic Commission, including both factory overclocked and water cooled variants. And before that, the unannounced Ampere SKU had made cameos at ASUS and HP's websites at different points.

What's especially interesting about the leaked GeForce RTX 3080 Ti photo you see above, which was posted to Facebook by Lok LOK, is that it seemingly reveals the new SKU will feature 12GB of GDDR6X memory, same as what Gigabyte's most recent EEC listing indicates as well. That's according to the label of this supposed shipment, which reads "GeForce RTX 3080 Ti Ventus 3X 12G OC."
That's not exactly a cryptic label, but lest there be any doubt, MSI offers a Ventus version of the regular GeForce RTX 3080 called the GeForce RTX 3080 Ventus 3X 10G OC. Those last two sets of characters denote the amount of memory, and a factory overclock.

Of course, nothing is certain until the new SKU becomes official. It is worth noting that previous leaks and rumors pegged the Ti model as having 20GB of memory. In an even earlier listing with the EEC, Gigabyte had registered a bunch of GeForce RTX 3080 Ti cards with model numbers suggesting 20GB of memory, and ASUS had let slip an ROG Strix variant on one of its support pages, also with 20GB. 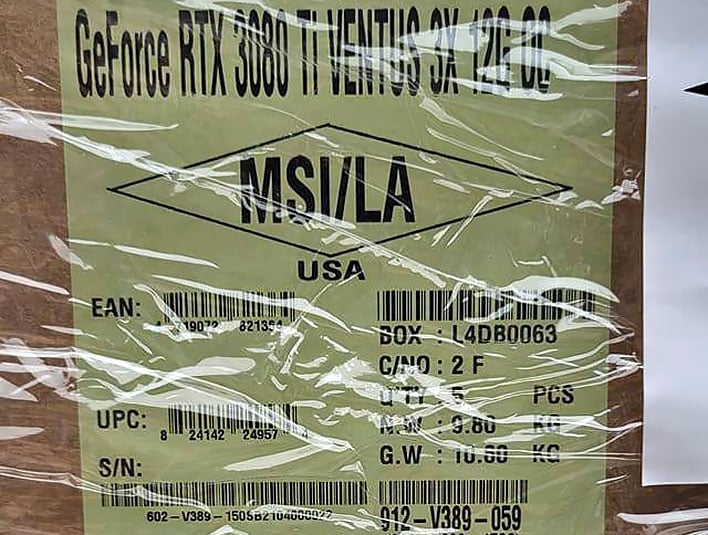 What gives? It is possible NVIDIA originally intended to offer a Ti model with 20GB of memory, but has since changed its plans for whatever reason—cost, availability, and/or not really feeling the competitive pressure from AMD at the high end. Plus, it's not like NVIDIA is having any bit of trouble selling every single GPU it can get its hands on. Whatever the reason, it's somewhat disappointing to see the Ti model only add 2GB of additional memory over the non-Ti variant.

It is the same amount (12GB) that AMD uses on its Radeon RX 6700 XT, whereas all three higher end models—Radeon RX 6800, 6800 XT, and 6900 XT—all feature 16GB of memory. NVIDIA will undoubtedly be using faster GDDR6X memory chips, but if you were hoping for 20GB, it looks like that is not going to happen.
The supposed shipment label does not reveal any other specifications. According to past rumors, however, the Ti model will arrive with 10,240 CUDA cores instead of 8,704 as found on the regular model, along with base and boost clocks of 1,396MHz and 1,695MHz, respectively. NVIDIA could also justify its release by adding more Tensor and RT cores, though we will have to wait and see.