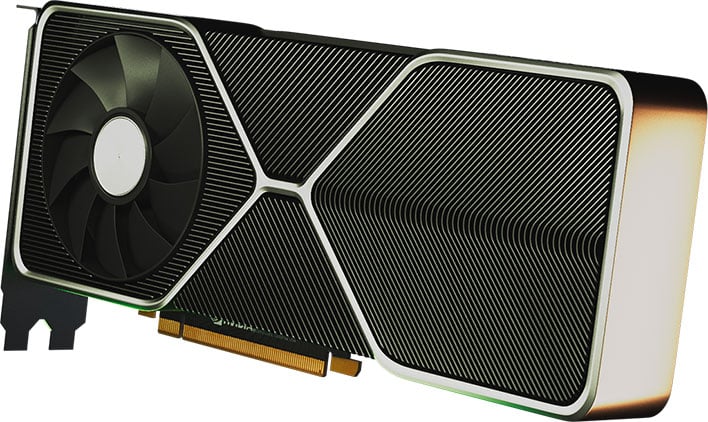 Photographs purporting to show what NVIDIA's upcoming GeForce RTX 3080 graphics card looks like recently emerged, and whether they are real or not, or perhaps indicative of an early prototype rather than what will be the finished product, we do not know. Either way, a user ran with the images and created some nifty looking renders.
To be clear, these are not official renders scraped from some hidden site at NVIDIA or anything like that, but are sort of fan creations. Well, that is assuming Reddit forum member JDSP_ is a fan of NVIDIA and its GeForce products. Regardless, the talented individual took a set of low quality photos that recently appeared, and concocted what could pass for official renders, and posted them to Imgur. 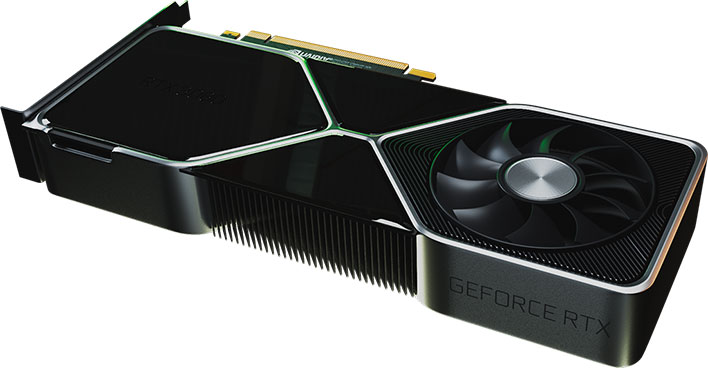 These renders depict the unique design of the leaked GeForce RTX 3080. Presumably representative of a Founders Edition model, the card shown eschews the traditional blueprint for a graphics card cooling solution by placing one of the two fans on the front and the other on the opposite side, rather than having them both on the same side of the PCB.
The PCB is also oddly designed, hence the unique cooling solution. Rather than run the full length of the card, there is a triangle section that is cut from the rear. It is not clear what prompted this design, assuming it is a legitimate reflection of the actual card (or even a prototype). Assuming it is, however, we are sure NVIDIA will explain its reasoning when the GeForce RTX 3080 launches.

The GeForce RTX 3080 will be based on NVIDIA's recently announced Ampere GPU architecture, when it launches later this year. It is rumored to feature a GA102-200 GPU with 4,352 CUDA cores and 10GB of GDDR6 memory piping data through a 320-bit memory bus, though like the renders, those specifications are not official.

It will be one of the cards that will go up against AMD's upcoming Big Navi (RDNA 2) lineup, setting the stage for a showdown in the high-end gaming graphics card space.