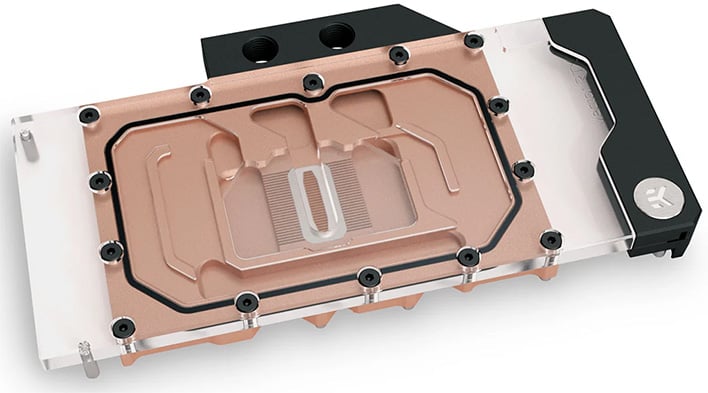 Don't feel bad if you were not able to buy a GeForce RTX 3080 yesterday—a lot of people are in the same boat. The card is in high demand, and understandably so (it's a gaming monster). Eventually the stock situation will be resolved (fingers crossed, anyway), and when you do get one, EK has a new series of nifty water blocks to liquid cool your card. Not just for the GeForce RTX 3080, either.
EK, for anyone who is not familiar, is a stalwart in the liquid cooling scene with an assortment of products, including custom loop parts, bundled kits, all-in-one coolers, and more recently it added a line of pre-built PCs with liquid cooling to the mix. Now it has launched a set of water blocks for NVIDIA's new GeForce RTX 30 series.
The first batch is built for the GeForce RTX 3080 and GeForce RTX 3090, the latter of which will open up to pre-orders next Thursday, September 24. One thing to note, though—these are not designed for the Founders Edition model. Those use a different style PCB and are not compatible, so keep that in mind if you plan to buy one of these blocks.

According to EK, it just did not have access to the necessary information to build a water block for the Founders Edition models.

"This latest graphics card launch was no different from the last one. The information that was available to us prior to the launch was very scarce. With new information surfacing each hour, we had made some drastic decisions that we thought were the best choice for both our customers and our partners. Over the night, we have completely redesigned our 2nd generation Vector water blocks aimed for reference layout graphics cards," said Edvard König, the founder of EK.
Not to worry, though, EK says it plans to offer a line of separate water blocks specifically for the Founders Edition models.
For this generation of cards, EK thickened the water block design with an 11.2mm copper base to clear the tall capacitors on reference cards. These blocks directly cool the GPU, VRAM, and voltage regulation modules (VRMs), with liquid flowing over those areas. They also come into contact with MOSFETs and chokes to reduce the chance of coil whine.
Other optimizations abound, such as using 27 micro-fins with 0.5mm wide micro-channels, and an "open split-flow cooling engine" that allows these blocks to be used with less powerful pumps, or pumps running at lower speed settings.
EK offers a list of specific cards that its new coolers work with, and you will want to hit up the cooling configurator page to ensure compatibility. As for pricing, these blocks run from $159.99 to $174.99, depending on the specific version and whether or not they come with a backplate. Additionally, you can purchase a standalone backplate for $39.99, or $47.99 for the nickel variant.