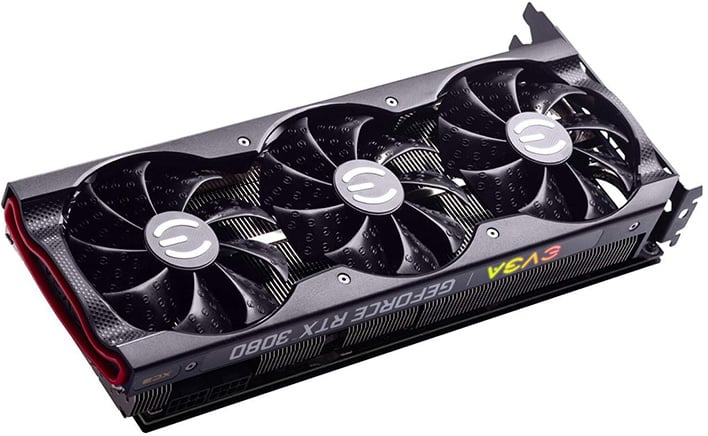 Even though none of NVIDIA's newly launched GeForce RTX 30 series graphics cards are actually available to buy right now, retailers have begun preparing for when they will be, by going live with product listings. Over on Newegg, for example, there are more than a dozen GeForce RTX 3090 and GeForce RTX 3070 listings. If you are planning to upgrade, you can make things easier by tracking availability with a handy monitoring tool
You can do that easy enough through NowInStock.net, a free web service that monitors online retailer sites to see when products come in stock or go up for pre-order. Not just graphics cards or electronics, either, but an assortment of goods—even hand soap.
Here are the ones to bookmark for the GeForce RTX 30 series...
The GeForce RTX 3080 will be available first, starting on September 17 (next Thursday). It has a $699 launch MSRP, and according to NVIDIA, it offers twice the performance of a previous generation GeForce RTX 2080. This is the card that NVIDIA considers to be its flagship consumer offering, with 10GB of GDDR6X memory. What about the GeForce RTX 3090, though?
That is indeed a more powerful card, with a "BFGPU" designation. It boils down to marketing, but the reason NVIDIA applied the flagship label to the GeForce RTX 3080 is because the GeForce RTX 3090 is the equivalent of another RTX Titan launch, with a whopping 24GB of GDDR6X memory and priced at $1,499 (MSRP). It will be available starting on September 24.
Finally, the GeForce RTX 3070 with 8GB of GDDR6 memory priced at $499 (MSRP) will be available starting sometime in October. NVIDIA has not yet announced an exact release date, but has said the GeForce RTX 3070 will best a previous generation GeForce RTX 2080 Ti in performance. Talk about a sweet proposition.
Also bear in mind that AMD is set to formally introduce its Radeon RX 6000 series next month. If are able to hang tight until then, that is the best course of action. Otherwise, it is hard to envision anyone having buyer's remorse after picking up any of NVIDIA's latest offerings.