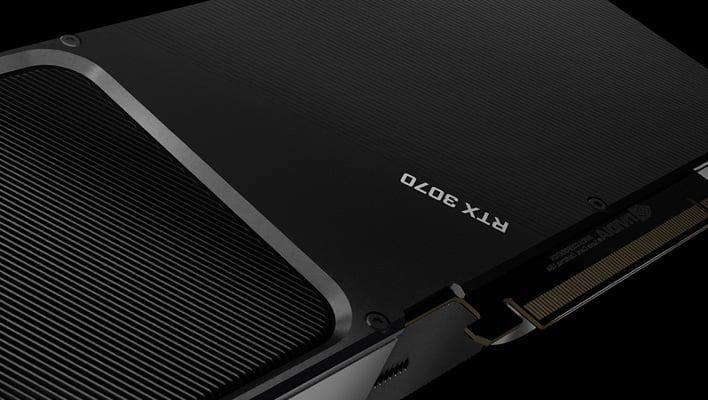 The recently announced GeForce RTX 3070 will launch to retail on October 15, 2020, at precisely 6:00 am PT (9:00 am ET), NVIDIA has announced. Previously, NVIDIA only said the card would be out in October, but had not mentioned an exact date (or time). Now it has, and it is not a coincidence that availability comes almost two weeks before AMD plans to announce its Radeon RX 6000 series.
A lot of PC gamers will be upgrading their GPUs this year. Anticipation is high for NVIDIA's GeForce RTX 30 lineup, particularly the GeForce RTX 3080 (which it is pitching as its flagship consumer card, whereas the GeForce RTX 3090 is primarily intended for creators) and GeForce RTX 3070. Both seemingly offer an incredible bang-for-buck proposition, in relation to NVIDIA's previous generation Turing GPUs.
The GeForce RTX 3070 is priced at $499 (MSRP), and according to NVIDIA, it delivers better performance than the GeForce RTX 2080 Ti, which itself launched at $999. Meanwhile, the GeForce RTX 3080 starts at $699 and is said to be twice as fast as the GeForce RTX 2080.
It will be interesting to see if NVIDIA's claims hold true, and we won't know until embargoes lift on performance reviews. The first of those will be for the GeForce RTX 3080—reviewers who signed embargoes will be able to post their analysis and benchmark figures on September 16, also at 6:00 am PT. This is a little later than originally planned.
"Due to COVID, delayed shipping and other issues, we received many requests from folks asking for time to finish their review of the RTX 3080 Founders Edition," NVIDIA Community Manager NV_Tim stated on Reddit.
NVIDIA certainly has some wiggle room, with AMD waiting until the end of October to unveil its Radeon RX 6000 series. In addition, NVIDIA's consumer cards will be out on store shelves up to more than a month before AMD even announces its next-gen series, which could potentially eat into some early adopter sales.
One thing to keep an eye on is the stock situation. It's expected that the GeForce RTX 3080 and GeForce RTX 3070 will both be in high demand, and with AMD holding out for several more weeks, initial inventories could sell out fast.