Some of NVIDIA's add-in board (AIB) partners have begun dishing out BIOS updates to add a potentially performance-enhancing feature to GeForce RTX 30 series graphics cards. That feature, of course, is Resizable BAR (Base Address Register), a PCI Express technology that promises to give gaming a boost in framerates on supported platforms.
In simple terms, Resizable BAR allows the CPU and system to tap into a graphics card's full memory frame buffer over the PCIe bus, instead of capping it to 256MB increments. The technology has actually been around for several years, but was not really utilized until AMD introduced its Radeon RX 6000 series, with Smart Access Memory (SAM) support. The caveat is that AMD's implementation only works with its own CPUs.
NVIDIA's implementation, however, is CPU agnostic—it works with both AMD and Intel platforms. You do need a compatible motherboard and graphics card, either or both of which might require a BIOS update, depending on the vendor. 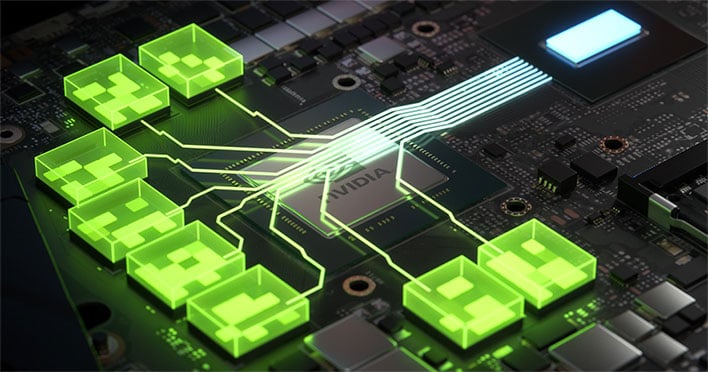 "As you move through a world in a game, GPU memory (VRAM) constantly transfers textures, shaders and geometry via many small CPU to GPU transfers. With the ever-growing size of modern game assets, this results in a lot of transfers. Using Resizable BAR, assets can instead be requested as-needed and sent in full, so the CPU can efficiently access the entire frame buffer. And if multiple requests are made, transfers can occur concurrently, rather than queuing," NVIDIA explains.

NVIDIA kicked off the Resizable BAR party with its regular (read: non-TI) GeForce RTX 3060, which shipped with a BIOS already supporting the feature. Anyone who purchased one of those cards need only pair it with a compatible motherboard and motherboard BIOS, and the latest Game Ready GPU driver, to take advantage of the feature.
Other GeForce RTX 30 series cards, however, require a BIOS update, and both Gainward and Galax have begun rolling them out. There are some things to keep in mind, though. One is that updating a graphics card's BIOS can be a little scary if you have never done it before. Just as with updating your motherboard BIOS, you want to be sure not to power off your system in the middle of the process. Your best bet is to utilize a battery backup, just to avoid a power outage bricking your GPU in the middle of a BIOS update.
You also have to be sure you are grabbing the correct BIOS for your precise graphics card model. The BIOS updates being served up at the moment apply to certain models offered in China, and not international SKUs.
That said, here are the download links (proceed at your own risk)...
A user on Reddit (El-Maximo-Bango) claims to have flashed the BIOS on their Galaxy GeForce RTX 3090 SG with success, and shared the following screenshot showing Resizable BAR is activated... 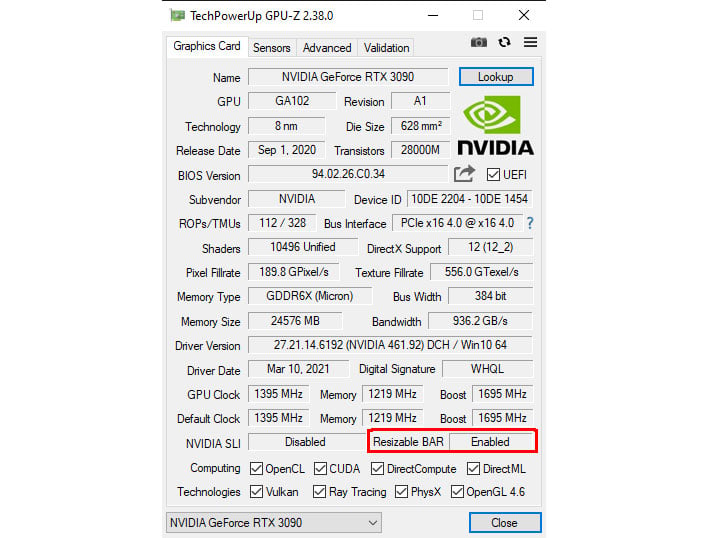 We've highlighted the relevant field in the lower-right section of the the GPU-Z screenie, showing Resizable BAR is working. If everything goes as it should, that is what you should see after updating your graphics card's BIOS. 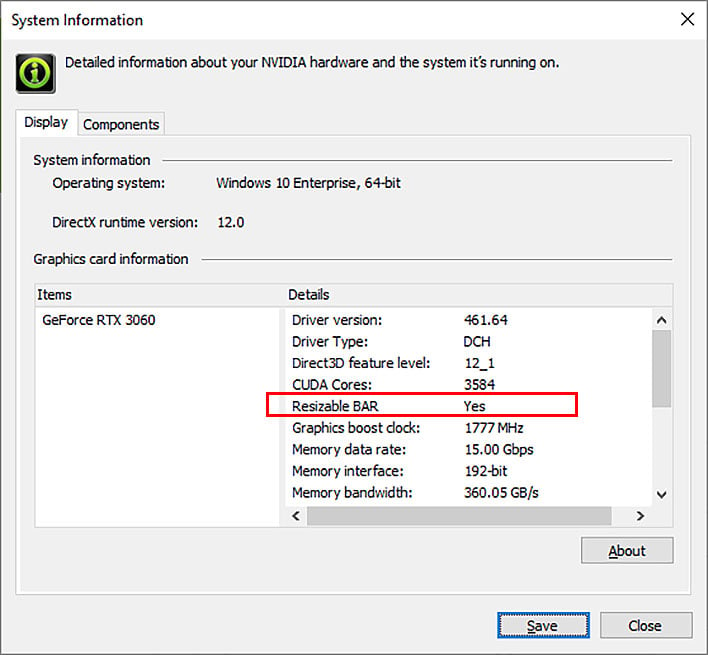 You can also check that it is working by opening up the NVIDIA Control Panel and clicking on System Information in the bottom-left corner. Under the Details section, look to see that Resizable BAR is labeled as Yes, as shown above. 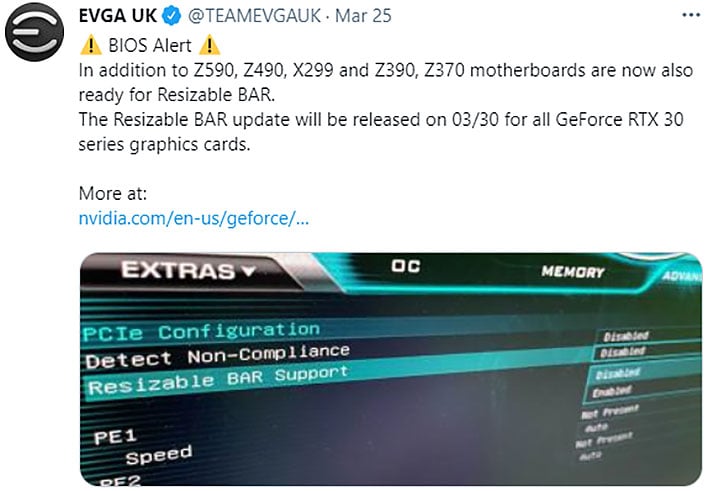 As for cards from other AIB partners, hang tight, more BIOS updates are coming. And specifically, EVGA stated on Twitter that a Resizable BAR update "will be released on 3/30 for all GeForce RTX 30 series graphics cards." You can bet that other hardware partners will not be far behind.