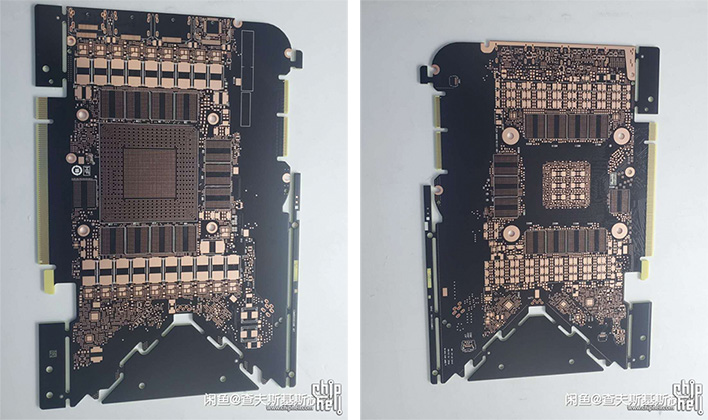 The big day is finally here—in just a few hours (and perhaps by the time you're reading this), NVIDIA will kick off its anticipated GeForce Special Event, where it will unveil its next-generation of consumer graphics cards based on Ampere. That leaves very little time for last-minute leaks. Getting in before the official buzzer, however, is a set of images purporting to show the printed circuit board (PCB) for NVIDIA's upcoming GeForce RTX 3090.
By all accounts, the GeForce RTX 3090 is going to be an absolute unit. Some early looks at press renderings by NVIDIA's add-in board (AIB) partners pretty much confirm the muscular SKU will arrive with 5,248 CUDA cores and a whopping 24GB of GDDR6X memory. From what we can tell, it's basically a next-gen Titan card, but without the Titan branding.
Be that as it may, the leaked PCB shots on the Chiphell forums look "really small," according to the person who uploaded them. And we have to agree. It would be nice to have another object in the photo for scale, but in lieu of one, we can look at the PCI Express connector to get an idea of the overall size of the PCB for the GeForce RTX 3090.
We also see the unusual shape NVIDIA is apparently rolling with, for its Founder's Edition models. The size and shape are consistent with leaked images of actual cards and cooling shrouds. And looking close, it appears NVIDIA has opted for a 19+2 phase design.
Interesting stuff, though obviously it is the actual performance of the card that matters most (well, that and pricing). We'll have to wait and see, but if recently leaked slides are accurate, NVIDIA will be pitching a two-fold increase in performance with RTX on, compared to the GeForce RTX 2080 Ti, in certain games (Control, Minecraft RTX, and Wolfenstein: :Youngblood).
The GeForce Special Event will be livestreamed on Twitch today, starting at 12:00 pm ET (9:00 am PT).