NVIDIA GeForce NOW Allows Gamers To Play PC Games They Own, So What's The Issue With Publishers?

By most accounts, NVIDIA nailed the concept of game streaming with GeForce NOW, which recently exited beta and launched to the public at large. Some feel it is the service Google Stadia could and should have been. They're somewhat different animals, but interestingly enough, it appears publishers are having a tough time figuring out where they stand in the cloud gaming movement.
That's putting it nicely. While we don't know for sure, it seems like publishers are trying to figure out how best to grab their piece of the cloud gaming pie. GeForce NOW is a interesting concept because it's not anything like Netflix. That's to say, it's not serving up a bunch of games for a monthly subscription rate. Instead, you still have to purchase games you want to play, so dollars stay squarely with publishers.
So, what's the point? GeForce NOW allows you to stream games to most devices. Leveraging hardware in the cloud, GeForce NOW can be played on low powered systems, including ones with relatively weak integrated graphics. The biggest thing is your Internet connection, and you're off and running.
NVIDIA's vision is that gamers can purchase titles wherever they see fit—Steam, Epic Games Store, and so forth—and stream them through GeForce NOW to any compatible device. Unfortunately, there is uncertainty over how the catalog of supported games will look, once publishers flex their muscles. Or that's how it seems to us, anyway.
You may recall that Activision-Blizzard already yanked its titles from GeForce NOW after it launched to the public. It came as a surprise to gamers, and if NVIDIA is to believed, it was just as shocked as us. NVIDIA chalked it up to a "misunderstanding."
"Activision-Blizzard has been a fantastic partner during the GeForce NOW beta, which we took to include the free trial period for our founders membership," Nvidia said in a statement. "Recognizing the misunderstanding, we removed their games from our service, with hope we can work with them to re-enable these, and more, in the future..." noted NVIDIA.
It seems like a stretch that NVIDIA is telling the whole story—surely it must have known ahead of time that this could or would be an issue with some publishers. In that sense, NVIDIA is culpable to an extent. However, let's not pile the blame entirely on NVIDIA. 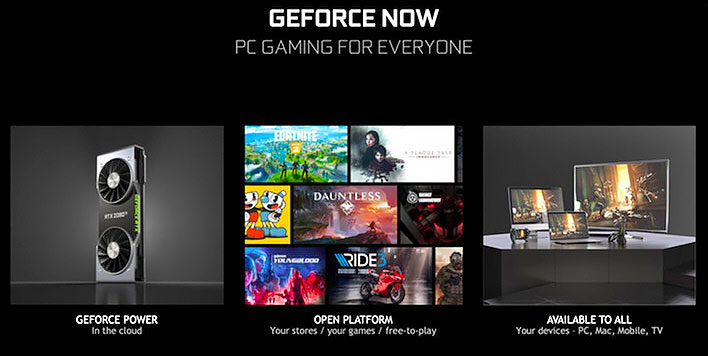 From the outside looking in, it sure seems like publishers are playing hardball. According to Bloomberg, which reported the above statement, Activision wanted a commercial agreement with NVIDIA before making its titles available to the public. NVIDIA has been trying to avoid commercial agreements, but it may not be able to. If that is the case, then it seems like publishers are trying to double dip, in a sense—they receive revenue from their game being purchased, and also want a cut from NVIDIA to host them for streaming.

In a blog post that went live today, NVIDIA simultaneously celebrated surpassing 1 million GeForce NOW gamers during the free trial period, but also warned that more games could disappear from the service.
"This trial is an important transitional period where gamers, developers and publishers can try the premium experience with minimal commitment while we continue to refine our offering. As we approach a paid service, some publishers may choose to remove games before the trial period ends. Ultimately, they maintain control over their content and decide whether the game you purchase includes streaming on GeForce NOW. Meanwhile, others will bring games back as they continue to realize GeForce NOW’s value (stay tuned for more on that)," NVIDIA said.
NVIDIA added that "game removals should be few and far between" as the transition period wraps up, and that new games will be added to GeForce NOW each week. So hopefully we are not looking at a substantial loss of game content.
It's hard to believe that NVIDIA didn't see this coming, but maybe it really didn't. Either way, the end result is that GeForce NOW could look a little different when the free trial ends, than it does right now. That's a bummer for gamers.
Fortunately, NVIDIA has been around a long time, and it has deep relationships with various publishers and game devs. Hopefully this is something NVIDIA and partnering publishers can get sorted out. NVIDIA built a great service for gamers, and if publishers get too greedy, it could ruin the fun. It probably won't get to that point, though. After all, NVIDIA was able to get CD Projekt RED to make Cyberpunk 2077 available on GeForce NOW the day it gets released. In addition, NVIDIA says it has 1,500 additional games queued up.

Update 2/21: It looks like Bethesda will be pulling most of its titles from GeForce NOW as well. A post on the NVIDIA website says, "Please be advised most Bethesda Softworks titles will be removed from the GeForce NOW service today. Wolfenstein Youngblood will remain for all members. Founders members can continue to experience the game with RTX On."