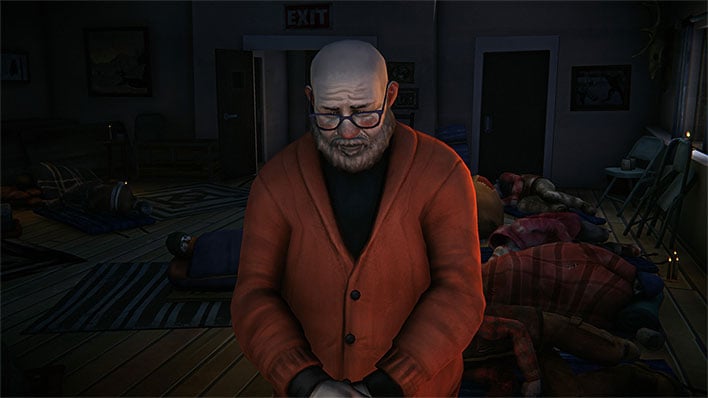 GeForce NOW is off to a somewhat rocky start, though not for any technical reasons—many people consider it a better version of Google's Stadia service. The issue is with publishers and whether or not they will let their games be hosted on NVIDIA's cloud game streaming platform. Following in the footsteps of Activision and Bethesda, indie developer Hinterland Games has instructed NVIDIA to yank The Long Dark from GeForce NOW.

The Long Dark is a exploration-survival game that puts players in the role of Will Mackenzie, a bush pilot who crashed landed in the Northern Canadian wilderness. Released in 2017, it ranks "Very Positive" on Steam from 55,692 user reviews. Steam is the only place The Long Dark is available to purchase for PC, and apparently the only medium for launching the game.
"Sorry to those who are disappointed you can no longer play The Long Dark on GeForce NOW. NVIDIA didn't ask for our permission to put the game on the platform so we asked them to remove it. Please take your complaints to them, not us. Devs should control where their games exist," creative director Raphael van Liero wrote on Twitter.
This is something NVIDIA has been contending with since launching GeForce NOW to the public. After the service exited beta, Activision-Blizzard pulled its games from the service, a move NVIDIA chalked up to a "misunderstanding."

"Activision-Blizzard has been a fantastic partner during the GeForce NOW beta, which we took to include the free trial period for our founders membership," Nvidia said in a statement. "Recognizing the misunderstanding, we removed their games from our service, with hope we can work with them to re-enable these, and more, in the future..." NVIDIA said at the time.
Then another publisher, Bethesda, did the same thing. This made us question what the issue is for publishers, and the only logical explanation we can come up with is they want a piece of the streaming pie.
It's been somewhat difficult to navigate, though, because publishers have not been all that forthcoming with their hard line stance on GeForce NOW. Until now, that is. When a user on Twitter questioned Liero's reasoning for having NVIDIA remove The Long Dark from GeForce NOW, he offered up an explanation.
"Because they sell this service based on access to a library of content. We have the choice whether to be in that library or not. Our distribution agreement is with Valve, not with NVIDIA," Leiro responded.
Therein lies the disconnect between proponents of GeForce NOW, and the small handful (so far) of publishers who are balking at allowing their games to be hosted there. Technically, one could argue NVIDIA is distributing games on GeForce NOW, but that twists what the service is really about. NVIDIA is charging a fee to access games already purchased. That's to say, nobody can hop on GeForce NOW and play a game they have not already bought elsewhere.

In the case of The Long Dark, gamers would have had to purchase the game from Steam before playing it on GeForce NOW. So, the publisher would still get its cut of revenue from the sale of the game. However, it's becoming increasingly clear that some publishers also want a cut of revenue from GeForce NOW, and not everyone agrees with that stance.
"Given the circumstances of how GeForce Now works, you shouldn't have that choice. You should have no say in where your users get to install the game they purchased," a user responded to the Twitter thread.

Another user was a bit more snarky.
"Those brave indie devs protecting their customers, who bought the game, from playing wherever they want," the user wrote.
Not everyone agrees with that stance, though.
"Where the hell do you get the idea that one business can take the intellectual property of another without permission? NVIDIA hasn't purchased licensing rights to host, full stop," another user wrote.
It's an interesting discussion. While players have the right to buy a game and install it on their PCs, should NVIDIA also have to purchase a license to install and host in on their service? And if so, what kind of fee would be reasonable?
Those are questions NVIDIA and its publishing partners are currently trying to figure out.