Ampere is starting to stretch out its legs and get comfortable on the desktop, with a relatively steady stream of models getting retail releases. It started with the GeForce RTX 3080, which launched in September, followed by the GeForce RTX 3090 later that same month. Then came the GeForce RTX 3070 in October, and a bit of a surprise entry earlier this month, the GeForce RTX 3060 Ti. So, what comes next?
Better retail availability, we hope. But when you have a shortage of chips and, on top of it all, one of your add-in board (AIB) partners reports that a truckload of GeForce RTX 3090 cards worth in the neighborhood of $340,000 up and vanish, well, it creates a frustrating situation for consumers, exacerbated by every-present bots.
Be that as it may, things will eventually normalize (hopefully by the middle of next year, if not sooner). In the meantime, more Ampere models appear to be coming soon, including at least four more SKUs. That's according to four unannounced models being registered by Manli with the Eurasian Economic Commission (EEC), the same place we caught wind of the GeForce RTX 3060 Ti before it was official.
Have a look... 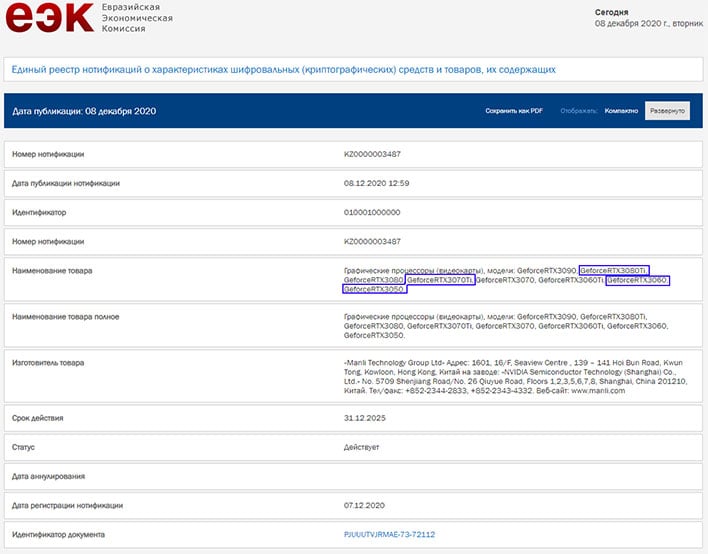 The listing shows a non-Ti version of the GeForce RTX 3060, which actually surprises us a little that it did not come out first. NVIDIA broke convention this round, coming out with a Ti card so quickly after Ampere launched, and attaching it to a model that had not yet launched in non-Ti form yet. Not that I am complaining—the GeForce RTX 3060 Ti is an excellent card, and I'm tempted to replace my GeForce GTX 1080 Ti with it.
Other cards registered by Manli include the TI variants of the GeForce RTX 3080 and GeForce RTX 3070, which seem inevitable, and the GeForce RTX 3050.
So what we have is a presumed mix of performance tiers on tap from NVIDIA. The GeForce RTX 3080 Ti and GeForce RTX 3070 Ti should outperform their non-Ti counterparts, and according to rumors, here's a spec comparison...
The entries in bold have not been announced, are not official, and the specs are not confirmed (so don't take them as gospel). But they have been the subject of leaks and rumors.
It will be especially interesting to see how the GeForce RTX 3050 holds up, as the most affordable version of Ampere when it launches, given the aggressive performance-to-price ratio of the cards that have debuted so far. If it maintains that same approach, it could end up a hugely popular card, given that the majority of gamers spend their dollars on more affordable models.