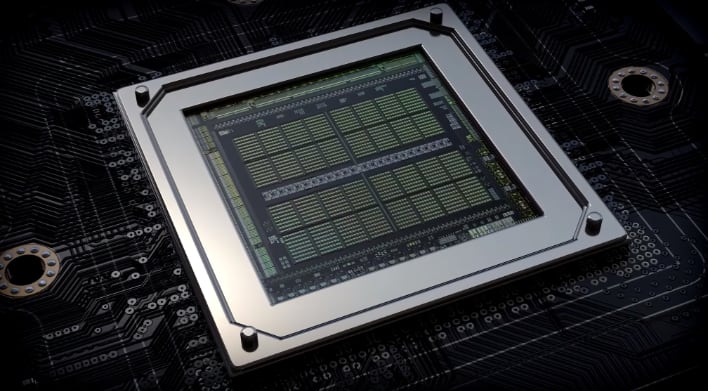 NVIDIA no doubt impressed the enthusiast community when it launched the initial members of its Ampere family: the GeForce RTX 3800 and GeForce RTX 3090. Both of those cards offer a significant uplift in performance compared to their GeForce RTX 20 Series predecessors, and they immediately sold out when they launched.

The GeForce RTX 3070 launched later with GeForce RTX 2080 Ti levels of performance, and the GeForce RTX 3060 Ti is tipped to launch in early December priced at $399. But NVIDIA is reportedly going even deeper into entry-level territory -- just as it did with previous generations -- by releasing a GeForce RTX 3050. Specs for the card have been revealed by hardware leaker Kopite7kimi, who has a pretty impeccable track record when it comes to NVIDIA's GPUs.

Unfortunately, Kopite7kimi didn't provide us with any details on memory configurations, but we'd imagine that the 256-bit memory bus of the GeForce RTX 3060 Ti will be cut in half to 128 bits for the GeForce RTX 3050. That reduction will also likely lead to just 4GB of GDDR6 memory being included with retail cards. The memory specifications are all just speculation at this point, but it seems highly plausible.

We also don't have any idea of when cards based on the GeForce RTX 3050 will be available, although we wouldn't put it past NVIDIA to announce the new entry around CES 2021. One thing is for certain, however; we have the feeling that these cards will be a lot easier to purchase -- given its much lower performance expectations -- than the already launched GeForce RTX 3070, RTX 3080, and RTX 3090.