You know that opening scene in the original The Fast and the Furious flim, where Dominic and his crew surround a truck and hijack the cargo? Well, that was Hollywood fiction (which went on to spawn a whole bunch of sequels), but apparently someone (or some group) did actually make off with around $340,000 of GeForce RTX 3090 graphics cards, stolen from a truck in China.
Sometimes, the truth is just as strange as fiction, and not necessarily more so, as this recent escapade highlights. Now I have no earthly clue if the truck was surrounded by a bunch of Honda Civics with brazen thieves leaping from their vehicles. Probably not, because real-life heists are usually not quite as wild as what Hollywood portrays.
Nevertheless, an MSI memo making the rounds suggests that around 40 boxes of GeForce RTX 3090 cards were stolen. Several sites have reported the value at around 2.2 million Chinese Yuan, or just a little shy of $340,000. So around a handful of cards, as the joke goes. 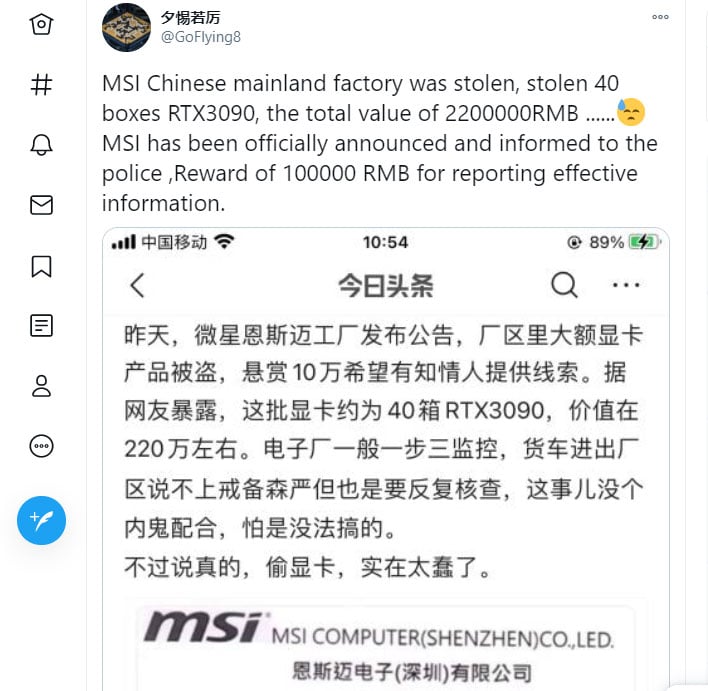 According to the user who posted the document, the thief or thieves made off with 40 boxes of cards. If we round up the reported value to $340,000 in US currency and divide by the retail cost of a Founders Edition model, we come to just shy of 227 graphics cards.
The actual value and number of cards could be more or less, depending on what the cost is based off, and if it factors in premium pricing for a custom card. Either way, it is a large sum, and obviously exacerbates the stock situation. And if going by street prices at places like eBay, the value is likely to be much higher, since these cards are selling at markups right now.

That said, the actual document does not make reference to boxes of cards or a value. However, it does make clear that the cards have been stolen, that the police have been notified, and that MSI is offering a reward of 100,000 Chinese Yuan, which is around $15,300 in US currency. MSI also suggests it will recommend leniency to crew members who rat out their cohorts, assuming this was a multiple person job.