Typically, when a graphics card launches with two memory configs, they're fundamentally the same, just with different memory densities. That's the case with the GTX 580 3GB, the RX 580 8GB, and the rare GTX 960 4GB. That's not the case with the two models of the RTX 3080, and it looks like the RTX 4080 could launch in a similar state.

New leaks from MEGAsizeGPU (@Zed__Wang on Twitter) promise that the GeForce RTX 4080 will come in two different versions: one with a 10-layer PCB sporting 12GB of GDDR6X memory, and one with a 12-layer PCB equipped with 16GB of the same. According to the leaker, the two versions have "completely different PCB designs," which is unusual for this kind of thing. 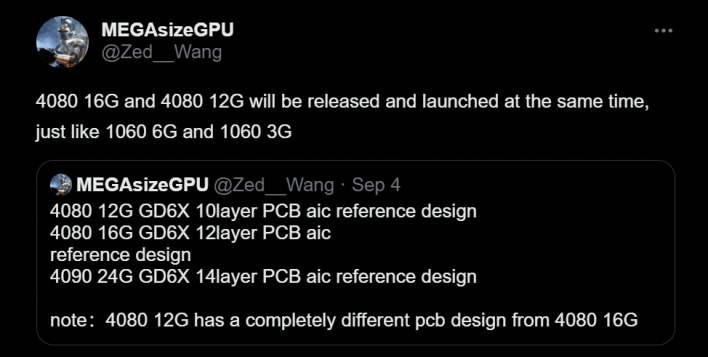 Rather than NVIDIA trying to make a decision on which model to launch, MEGAsizeGPU says that the two variants will in fact be released and launched together, "just like 1060 6G and 1060 3G". He is of course referring to the GeForce GTX 1060, which launched with 3GB and 6GB models. Contrary to what you might expect given the simple doubling of memory capacity, those Pascal GPUs actually differed slightly in their capabilities, with the GTX 1060 6GB card having additional shaders and texture units compared to the 3GB model.

It's likely that the same will be true of these GeForce RTX 4080 cards, as well. 4GB of memory is a lot to trim from a GPU, and it's likely that the 12GB card will see a reduction to a 192-bit memory bus width from the full 256-bit width of the AD103 GPU. Ordinarily we'd expect that to result in the card being slapped with the "x70" name, but supposedly both of these models will be branded "RTX 4080." Quite confusing.

Even more confusing is that regular leaker kopite7kimi says that the RTX 4070 and RTX 4080 12G models could share a PCB. If that's the case, then either the AD103 and AD104 GPUs are pin-compatible, or the RTX 4080 12G card will be using the smaller AD104 GPU. That actually makes sense—AD104 has a 192-bit memory bus, and as a smaller GPU, yields on it will likely be better. It's impossible for anyone but NVIDIA to say at this point, though. 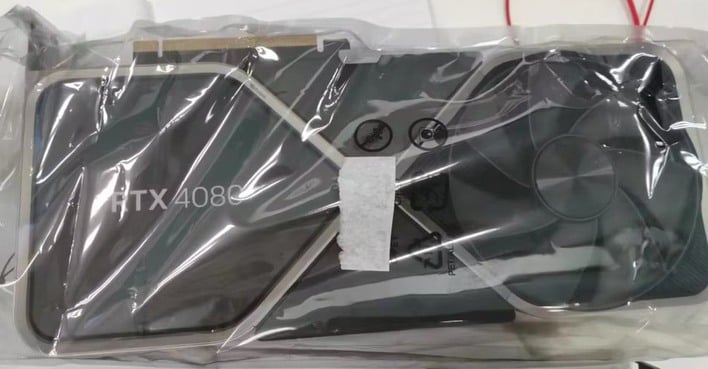 
Earlier, Japanese Twitter user Elysian Realm (@KittyYYuko) shared a picture of what they purport to be a GeForce RTX 4080 Founders' Edition card. The picture is not particularly high-resolution and the card is shrouded in an anti-static bag, but you can clearly see a cooler that strongly resembles the GeForce RTX 3090's stock cooler with "RTX 4080" emblazoned on it.

Elysian Realm tweeted back in May that the RTX 4080 FE "looks slightly bigger than the RTX 3090 FE." This latest image would seem to corroborate that statement, as the cooler appears to be extremely tall to accommodate what looks like a 120-mm (or larger) fan. Responding to a question, the leaker confirms that the card occupies 3 expansion slots, just like the RTX 3090.