Sometimes the leaks and rumors are right on the money. We bring that up because as previously tipped in unofficial circles, NVIDIA today introduced an upgraded version of its GeForce RTX 3080 with more GDDR6X memory on board and a few other goodies. It doesn't appear the card will replace the existing model, but sit alongside it.
That's how it is laid out on the 'GeForce RTX 3080 Family' product page, anyway. As presently constructed, the product page outlines specifications for two GeForce RTX 3080 models—10GB and 12GB GDDR6X—and the GeForce RTX 3080 Ti, which also sports the same 12GB GDDR6X arrangement as the upgraded non-Ti variant.
There's no dedicated press release accompanying the upgraded SKU, though NVIDIA did give it a mention in its driver news. NVIDIA today announced it is prepping a driver release that is mostly focused on bringing optimizations to the God of War release that is bound for PCs later this week, though it contains other goodies as well. Towards the end of the announcement, NVIDIA points to an "additional version of the GeForce RTX 3080 with 12GB GDDR6X."
"The GeForce RTX 3080 was the first GeForce RTX 30 Series graphics card that we released, and remains one of the best high-performance GPUs around, capable of delivering amazing performance at 4K and in the 150+ NVIDIA DLSS AI-accelerated games and apps," NVIDIA said.
"Starting today, our GPU partners, including ASUS, Colorful, EVGA, Gainward, Galax, Gigabyte, INNO3D, MSI, Palit, PNY and Zotac, will begin offering a 12GB GDDR6X version of the GeForce RTX 3080. A driver is available now to support this new version via our website and GeForce Experience," the company added.
NVIDIA does not plan to offer a Founders Edition model of the upgraded card. The company also confirmed the new part is only shipping with a reduced hashrate in hopes of getting the card into the hands of more gamers.

Here's a breakdown of the specs... 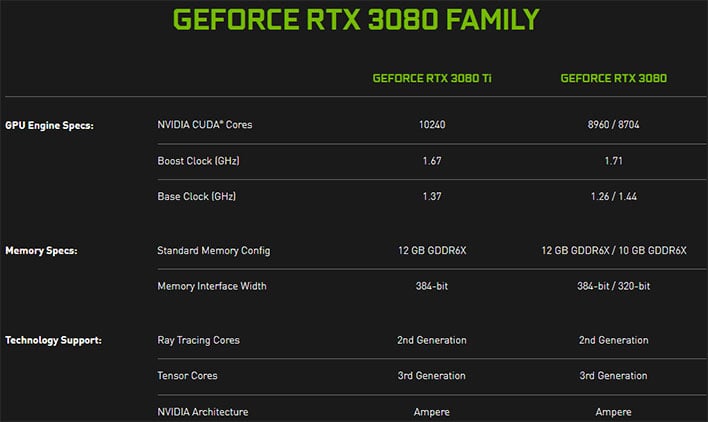 As you can see, the upgrade to 12GB of GDDR6X memory and a fatter 384-bit bus are arguably the biggest deals, putting the memory arrangement on par with the Ti model. Same goes for the resulting memory bandwidth, as it's been bumped up from 760GB/s to 912GB/s. The card brings a small uptick in stream multiprocessors (SMs) and CUDA cores too—from 68 to 70, and from 8,704 to 8,960, respectively.
The boost clock remains the same, though interestingly enough the base clock is slightly slower, going from 1.44GHz to 1.26GHz. This is despite having a higher 350W TGP (compared to 320W).
There's no mention of pricing, but EVGA has already listed a custom model on its website, the GeForce RTX 3080 12GB XC3 Ultra Gaming (12G-P5-4865-KL). EVGA's pricing is $1,249.99. That's $370 higher than the GeForce RTX 3080 XC3 Ultra Gaming (10G-P5-3885-KL) with 10GB of memory, which lists for $879.99. Both cards are out of stock.
That's a chunky premium for sure, though we have no idea what kind of real-world performance increase might be on tap to help justify a $370 increase. It also remains to be seen if there will be cheaper variants, both from EVGA and other add-in board partners.