Wildy Volatile Bitcoin Balloons To New High, Is It Time To Buy Into Cryptocurrency?

Remember when Bitcoin was worth a fraction of a cent? Those days are long gone, and barring a cryptocurrency crash of epic proportions, they may never come back. Instead, Bitcoin this week went on a rally, skyrocketing to its highest value ever. This raises the question, is it finally time for casual observers to invest in Bitcoin?
We don't give that kind of advice here (investing), but if that is what you are pondering, let's look at the situation. After beginning the month valued at around $48,000, Bitcoin has been steadily climbing the past couple of weeks, and reached as high as $66,947.77 yesterday. That bests its previous high of $64,889, which it reached last April—the same month Bitcoin and Ethereum combined for a $2 trillion valuation.

The record high follows the Security and Exchange Commission's first approval of a Bitcoin future exchange-traded fund (ETF). Specifically, Proshares Bitcoin Strategy ETF launched this week, and there's already a second one in sight: Vaneck's Bitcoin Futures ETF is approved to listed next week (after October 23, which falls on a Saturday).
"There are a multitude of investors who have brokerage accounts and are comfortable buying stocks and ETFs," ProShares Chief Executive Michael Sapir told The Wall Street Journal in an interview. "We think this will appeal to them." 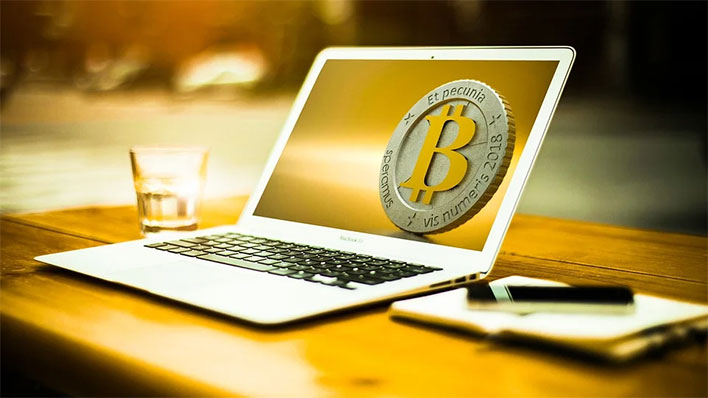 This has opened the door for other Bitcoin future ETFs to begin trading in the weeks ahead, and evidently investors are excited. They should also be cautious, though, given the highly volatile nature of cryptocurrency. Bitcoin has been the most stable crypto of the bunch, but has still been prone massive swings in value.
For example, after hitting its previous record high in April, Bitcoin would go on to lose more than half its value in the months ahead, falling to below $30,000 in July. Now it's on a big upswing, albeit not quite as high as yesterday—it's trading at $63,316.29 at the time of this writing, according to Coinbase.
There is speculation Bitcoin could shoot to the moon, in essence, perhaps even topping $100,000.

"Should the bullish momentum continue, it isn’t out of the realm of possibility to hit $80,000,” Leah Wald, Chief Executive at Valkyrie Investments, told Bloomberg. "I think $100,000 this year is a bit optimistic, but anything is possible and it wouldn’t surprise me if we somehow pushed that far north."
Where it ultimately goes is anyone's guess. And the higher it goes, the more regret a hungry patron of Papa John's will feel after having paid 10,000 in Bitcoins for a pair of pizzas back in 2010. Worth around $41 at the time, at today's valuation, those Bitcoins would collectively be valued $633 million. Oof!