We’ve been getting “amped” for NVIDIA’s next-generation Ampere technology for quite some time, and it appears that the wait is nearly over for us to starting receiving some official information on the new GPU architecture. NVIDIA CEO Jensen Huang is even getting in on the action by giving us just a tiny taste of Ampere prior to his Thursday GTC 2020 virtual keynote.

In a humorous video posted to NVIDIA’s official YouTube video, Jensen is just chilling in his kitchen – sans his iconic leather jacket – waiting for a delicious entrée to come out of the oven. But rather than a succulent turkey or a homemade lasagna, Jensen pulls out what looks to be a DGX A100, which “has been cooking for a while”.

He places the hot and fresh silicon delicacy on a cutting board and declares it to be “the world’s largest graphics card”.

Since this is likely the DGX, there are probably 8 A100 GPUs in there for some immense AI computing power. The inevitable DGX-2 systems would bump the number of A100 GPUs to 16. However, we’re sure to learn more about this system and what else NVIDIA has been working on during the GTX 2020 livestream in just two days. 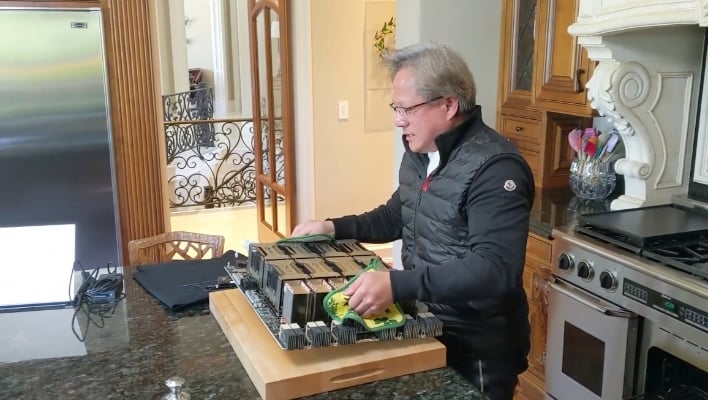 For those that are more concerned about the prospects of Ampere in the consumer market, specifications for the alleged GeForce RTX 3080 Ti leaked earlier this morning promising up to 5,376 CUDA cores, 12GB of 18Gbps memory with 864GB/s of bandwidth. Fully decked out, the PCIe 4.0 compliant graphics card is expected to deliver 21 TFLOPS computer performance.

NVIDIA got the ball rolling with real-time ray tracing on its first-generation GeForce RTX 20 graphics cards. The incoming GeForce RTX 30 family is expected to beef up the RT cores to deliver less of a performance hit with ray tracing enabled on your favorite games.