As time goes on rumors continue to swirl that NVIDIA will rehash its GeForce RTX 2060 graphics card from its previous generation Turing stack, but equip it with 12GB of GDDR6 memory. The latest evidence that this is the plan can be found at the Eurasian Economic Commission (EEC) website, where Gigabyte has listed no fewer than four unreleased GeForce RTX 2060 12GB models.
That does not amount to a concrete confirmation—nothing short of an official announcement truly qualifies as such—but it is pretty darn close, especially considering multiple past leaks and rumors. The updated listing, which was published this week just adds to the pile. Here's a look... 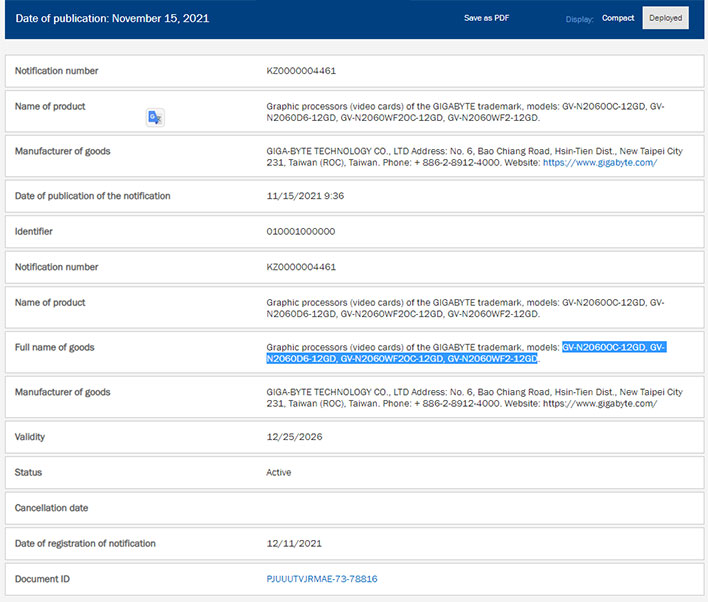 We've cropped off some of the white space for a narrower image so that it is easier to view (click to enlarge for a full view), but have not altered any of the contents. We also took the liberty of highlighting the pertinent entries. They actually appear in two spots, including the 'Name of product' and 'Full name of goods' fields and show the same thing.
There are four models revealed in the listing...
All four are existing model numbers, save for the "12GD" designation at the end, which denotes a 12GB GDDR6 upgrade. So looking those up we can see Gigabyte is at minimum planning on 12GB versions of its GeForce RTX 2060 D6 OC, GeForce RTX 2060 D6, GeForce RTX 2060 Windforce OC, and GeForce RTX 2060.
The 12GB GDDR6 allotment is double what shipped with the original GeForce RTX 2060. Card makers who wished to remain anonymous purportedly told ZDNet Korea that NVIDIA is planning to launch the upgraded SKU early next month. They also claim that the performance specifications will be the same, except for the amount of memory.
If that's true, it means the card will still be built around NVIDIA's GA106 GPU, with the same number of CUDA cores and same 192-bit memory bus. What's less clear is whether NVIDIA will implement a mining limiter on the cards.
As to why NVIDIA is doing this, it's said that TSMC's 12-nanometer manufacturing process is in less demand than its 7nm and 5nm nodes. In theory, this would allow NVIDIA to get more graphics cards into the hands of gamers where there is insatiable demand at the moment. Such a move is not going to end the shortage of GPUs, but it might help some PC gamers to upgrade their rigs or build new ones. That is, if this SKU gets released.