After leaving OnePlus behind, co-founder Carl Pei started Nothing—that's a company called "Nothing," not the state of nonexistence. Its first product was a set of true wireless earbuds, and it followed that up with a mid-range smartphone. Now, Nothing is taking another swing at wireless earbuds with the poorly named Nothing Ear Stick. These AirPods-style earbuds drop some features from the first pair of Nothing buds, but they also cost just $99. Apple's earbuds are a lot more spendy, starting at $170, and the Nothing Ear 1 are $150.

The Ear Stick buds have the same transparent aesthetic as Nothing's other products. They have the same external stick section like the company's Ear 1 buds (and AirPods, for that matter), but they rest in the outer ear rather than poking into the ear canal. If the Ear 1 are Nothing's AirPods Pro competitor, the Stick are akin to the entry-level AirPods. Inside, the Ear Stick buds sport a custom 12.6mm driver and enough battery for about seven hours of playback time. Nothing has a lot of confidence in the audio quality, but connectivity is limited to SBC and AAC—there are no high-quality Bluetooth codecs like LDAC or aptX.

The case is also highly stylized with a transparent outer shell that shows off the earbuds when they're locked in place. Simply rotate the tube-shaped case to remove them. There's no wireless charging this time, but that helps make the earbuds less expensive. The same goes for active noise canceling, which was available on the Ear 1 but not here. 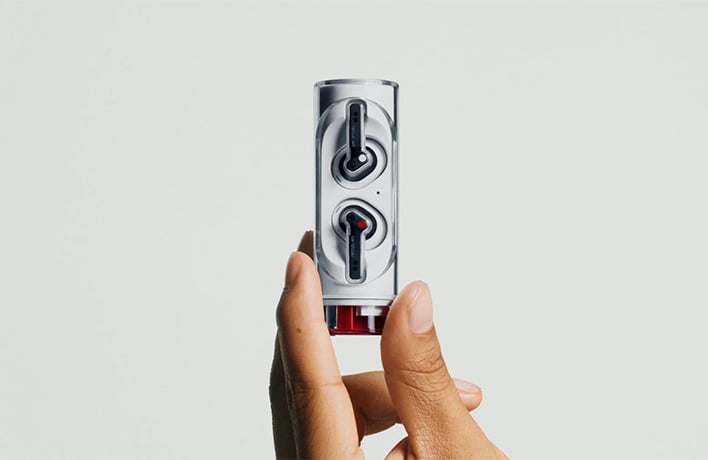 Even with the missing features, the Ear Stick could outperform the company's other earbuds in some ways. Nothing says it has improved the antenna design, moving the module farther down the stick, which makes the connection more reliable. This was an issue with the Ear 1. They also support Google Fast Pair and Microsoft Swift Pair to make it easier to get the Stick earbuds connected to your various devices. Again, that was a problem for the Ear 1. There's a companion app to control the new earbuds, but if you're using a Nothing Phone, the buds will integrate with the system UI for control.

Nothing does not sell its smartphone in the US, but you can order the new earbuds stateside. Pre-orders are live today for $99. However, anyone with a Nothing Phone can get 10% off the purchase. Nothing expects to begin shipping the Ear Stick on November 4th.

Tags:  Audio, Bluetooth, earbuds, nothing
Follow Us:
Your Next PC Platform?
KEEP INFORMED