CEO and former OnePlus co-founder Carl Pei announced something about Nothing yesterday during a live stream event. Pei said, "We're building the most compelling alternative to Apple."

Nothing is a consumer tech company based out of London, UK, and announced its first highly anticipated smartphone device yesterday. The online event included 10 minutes of hype, before Pei finally unveiled the highly awaited Nothing smartphone, Phone 1. The phone will operate on Android and will utilize a Qualcomm Snapdragon processor (no mention if it will be the Snapdragon 8 Gen 1 or something else). And yes, this is the same phone that Pei was captured showing Cristiano Amon, Qualcomm CEO, in a privacy-protecting case back at the beginning of March.

Phone 1 will be the company's second device launch, following its Ear 1 true wireless earbuds last year. While a teaser trailer shown yesterday suggested a possible series of light strips built into the back of the device, and previous reports that it could rock a transparent design, Pei is not yet ready to begin talking about specs and pricing.

During a recent interview with The Verge, Pei was vague about what function the light strips might bring to the Nothing phone. When asked if they could be a notification light, which many remember from older Android phones and Blackberry, Pei simply answered, "Maybe".

However, the CEO is more upfront when it comes to the software of the upcoming device. A series of images of Nothing OS was released yesterday, which shows the Android skin that Phone 1 will ship with. The design is inline with the company's branding, using a black and white skin that is emphasized by its Nothing logo.

Yesterday's press release indicated that the phone's Nothing OS will have "just the essentials, where every byte has a purpose." This should appeal to many who rue the fact that so many smartphones ship with so much bloatware these days. It can be a daunting task to go through all the apps after setting up your new device, and uninstalling all the unnecessary and unwanted apps. 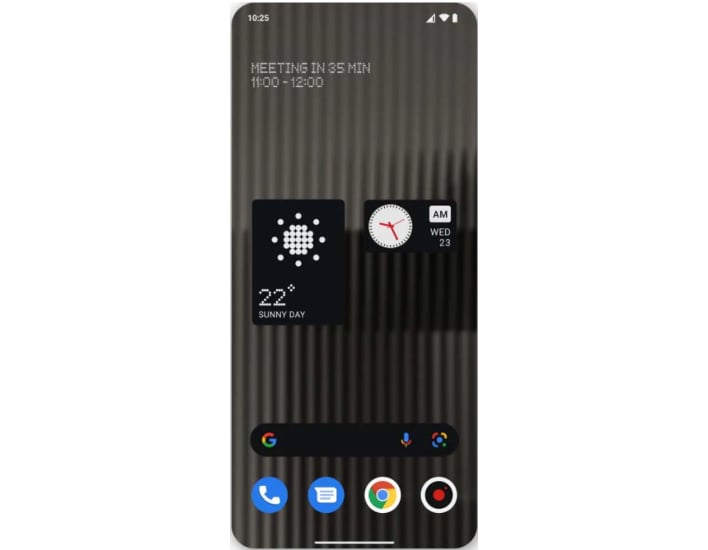 Pei says that Nothing aims to create products with a singularly focused design language across hardware to software, so that there is never any doubt about what phone you are holding. He references Dyson's designs as having that unique design that he hopes to capture with Nothing's devices.

While some companies may focus on competing with other Android phones, Pei is more focused on competing with Apple. "We're building the most compelling alternative to Apple. If you want products that connect and work seamlessly together, the only choice is Apple. As soon as you leave that ecosystem for a Windows PC or an Android phone, it breaks down. There is no alternative to Apple", Pei stated.

Much like how Apple earbuds work so well with the iPhones due to the integrated ecosystem, Pei sees the same being true for Nothing devices. He said, "(Nothing earbuds) will work better with the Nothing smartphone because it's integrated on the system level and not just the app level."

Nothing is most certainly something that we can all be excited about. Pei's experience and knowledge provides a solid foundation from which to build from. But as with any startup, there will be some rough edges to smooth out along the way. Ear 1 earbuds launched with a few issues, but as Pei indicated, he is taking it one step at a time. That next step will be what many are waiting for, the launch of Nothing's Phone 1.