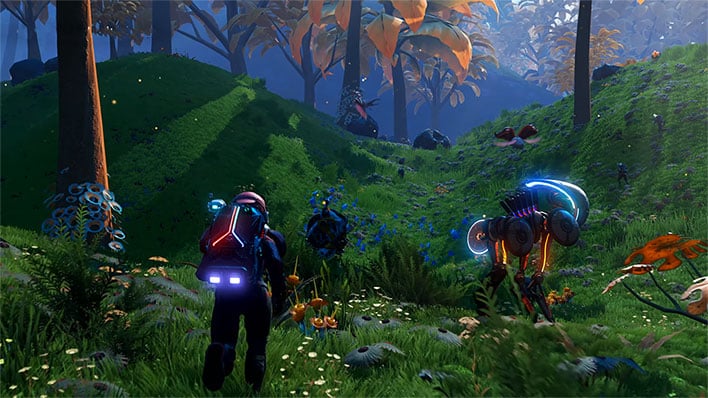 No Man's Sky is getting a visual upgrade in the near future, on both PC and next-gen game consoles, with the release the v3.10 update. Otherwise known as The Next Generation, developer Hello Games is promising graphical enhancements and smoother gameplay, thanks to a bunch of tweaks underneath the hood.
"Wander across lusher, denser alien environments than ever before. Planetary terrain is populated with thicker grasses, flowers, fungi and rocks, rendered with higher resolution textures and more detailed geometry," Hello Games says.
This is no doubt aimed at building on the hype of the Xbox Series X/S and PlayStation 5 launches that are right around corner, as evidenced by the timing of this update. However, PC players will get updated graphics as well, at least if running the game in Ultra mode. You can check out the updated visuals in the launch trailer...

Hello Games is taking advantage of the new hardware capabilities of both next-gen consoles. Same goes for recent graphics card launches on PC, including NVIDIA's GeForce RTX 30 series and AMD's Radeon RX 6000 series. And judging by what is shown off in the trailer, it is indeed a gorgeous update with improved details and textures.
Hello Games says next-gen console owners will enjoy a smooth 60 frames per second at 4K resolution. Save for the Xbox Series S—on that console, gamer can choose between "high quality native resolution at 30 fps or high performance at 60 fps."
The update also brings haptic trigger feedback to the DualSense controller, as well as first time support for up to 32 players in multiplayer on consoles.

"Seamlessly transition your No Man’s Sky journey to the next generation. Xbox One saves are automatically compatible with the next Xbox generation, and PS4 players can upload their save data in-game for download on PS5," Hello Games says.
The patch will be available when the next-gen consoles launch next month.